Maxta has announced the launch of its MxSP, the first Cisco-certified hyper-converged system to run on UCS C-Series servers and support metro-distance clusters.

Maxta claims its “software-defined storage solutions provide organisations the choice to deploy hyper-convergence on any x86 server, use any hypervisor, and any combination of storage devices".

Um, marketing alert, marketing alert. What Maxta seems to be saying is that customers (aka organisations) can deploy virtualised X86-based servers and attach any storage devices to them to create a hyperconverged system.

Instead of a hyperconverged system being a single IT appliance-like entity bought with a single SKU, as with Nutanix and Simplivity (OmniStack) boxes, it’s now the result off an on-site integration exercise resulting in a scale-out cluster of software/server/storage/networking nodes.

Simplivity’s channel partners would integrate the UCS kit, including Nexus 3048 switches, with the rest of the components, using a reference architecture (registration required) and deliver a single-SKU system to customers. 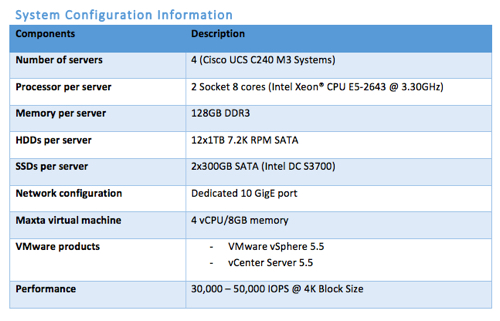 No networking switch is included but VMware vSphere Metro Storage Cluster is supported, providing the ability to replicate data across data centres and so provide protection against data centre failure.