Forget the climate: Fatties are a much bigger problem - study

Fat guy? Drink or smoke? You're worse than a terrorist

Opinion The BMI-fuelled "obesity epidemic" bandwagon continues to rumble along, with the latest ridiculous report claiming that swingbellies are now twice as serious a menace to human prosperity as climate change.

No, really. The giant brains of the McKinsey Global Institute have assembled this authoritative graph, which ranks the various badnesses humans cause according to economic damage: 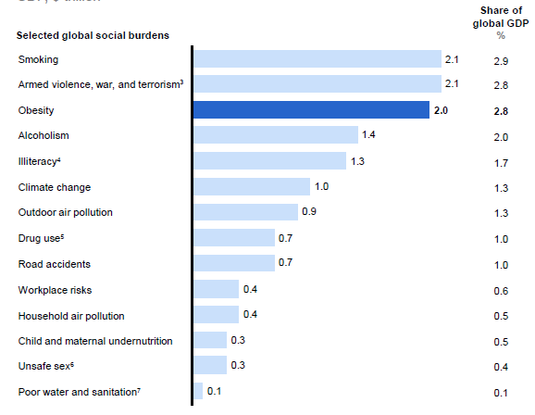 If you're a fatty AND a smoker, you're almost as bad as TWO terrorists**

Oh yes - climate change is basically nothing, compared to bulging bellies and straining buttons around the world. And one should note that the "armed violence" bar above is largely made up of military spending, as opposed to actual death, injury, destruction etc - military spending which in many cases results in no actual violence whatever. Even if the human race completely gave up fighting tomorrow that bar would still mostly be there: so you might choose to disregard it at least in part and accept that the main evils in the world today are smoking, fatness, boozing and being unable to read.

Compared to these climate change is nothing much: and starving kids, thirsty people, lack of sanitation etc - those are complete non-issues which we really ought to be ignoring.

How did the McKinsey dunderheads come up with this curious view of the world? Well, there isn't space and time to go into their thinking on smoking, war, illiteracy, alcoholism or the climate. But we do have time for a quick canter through the "obesity" numbers.

As one would expect, the McKinsey story is based on the now pretty much totally discredited Body Mass Index (BMI) system. This dates from the early 19th century, when it was invented by an obscure Belgian sociologist lacking any medical knowledge, by examining the measurements of people in Europe back then. The BMI system assumes that a person's weight ought to scale up in line with the square of their height - if it increases more than that as height goes up, the BMI assumes that people are becoming fatter.

This is a pretty ludicrous thing to assume, as humans bodies are not two-dimensional but three-dimensional: it's obvious right on the face of it that there ought to be a cube law rather than a square involved. Furthermore, as any engineer will tell you, as mass goes up the cross-sectional area of supporting structures must go up too. It won't do to merely scale something up in three dimensions if you're using the same materials - you must make things such as legs proportionately thicker and thus even heavier. This is why a cat is much heavier than a scaled up, cat-sized insect would be (if it existed, such an insect's legs would constantly be snapping); this is why an elephant is much heavier than an elephant-sized cat would be.

And this is why the populations of the rich world, which have mostly increased significantly in height in quite recent times, should be expected to have significantly higher BMIs than the previous generations - as indeed they do. But instead of realising this, researchers like the McKinsey crowd ignore the matter of height increase and assume that people have become much fatter. They write:

More than 2.1 billion people — nearly 30 percent of the global population — are overweight or obese. That’s nearly two and a half times the number who are undernourished.

As one would expect, the supposedly "overweight" and "obese" are heavily concentrated in rich, tall nations. More and more studies on these populations are confirming that in fact an "overweight" BMI, among tall and wealthy westerners, is actually the new "ideal" - it is in fact the healthiest BMI band, marginally healthier than being "ideal".

Actually, skinnies are probably five times worse than fatties. And what about 'total lack of basic numeracy'? 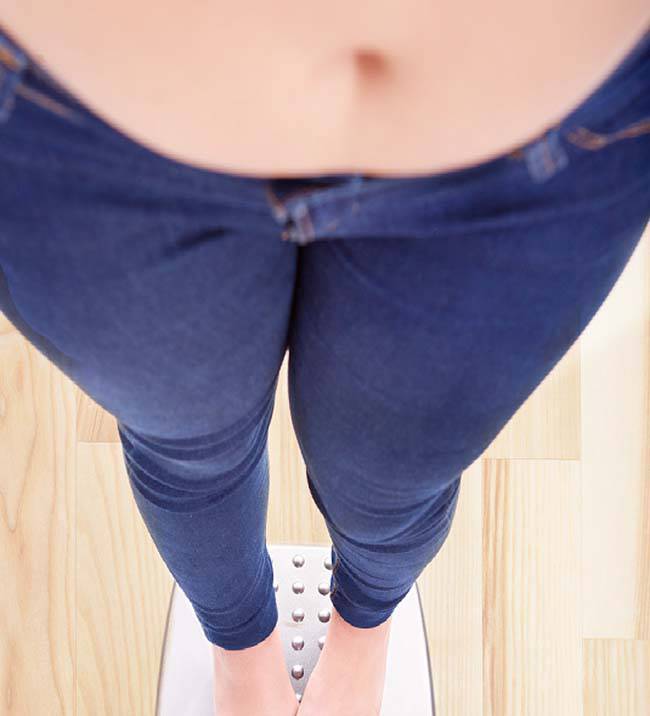 My god, woman, you're DESTROYING the WORLD! Nearly two-thirds of the world's 'obese' people are female.

It's actually pretty hard to tell "ideal", "overweight" and "obese" apart in health terms among a tall population: those three bands represent the middle of the spectrum. The point at which fatness actually becomes noticeably dangerous to health among such people is "severely obese" - a BMI of 35 or more. And being "severely obese" is still considerably better for you than being "underweight" - "underweight" Americans face health risks some 60 per cent higher than "severely obese" ones.

So in fact we can largely ignore "overweight" and "obese" people. Only "severely obese" people are really fat enough to seriously be unhealthy. How many of them are there?

Well, the entire "obese" group worldwide is only 8-9 per cent of the human race according to this paper based on the same UN numbers used by the McKinseys (males 6.5 per cent, females 11.1 per cent obese). The UN doesn't keep stats on "severely obese" people, but if the USA is any example, according to this paper, rather less than half of the "obese" are "severely obese". So it seems reasonable, given that the fatties are known to be concentrated in countries such as the US, to say that at most 4 per cent of the world's population are genuinely so fat as to cause problems.

Meanwhile the McKinsey crew tell us that at least 12 per cent of the human race are "undernourished". And, as we know, the BMI-"underweight" are actually running much greater health risks than the "severely obese".

All of which indicates that, all other things being equal, we might expect the skinnies - most of whom are probably skinny involuntarily - to be causing something approaching five times as much economic damage as the fatties wilfully stuffing themselves are. Even if this estimate isn't exactly right, it's enough to show that the graph above is - plain and simply - a load of bollocks. And the very fact that this graph and conclusions drawn from it is being faithfully reproduced all across the world's media shows equally plainly that basic lack of numeracy should be well up in the economic-damage rankings (to be honest the fact that a lot of people are illiterate, just in this particular specific case, is doing them a favour as they won't be able to read any McKinsey-derived tripe today).

So maybe we should just cool it a bit on obesity panic and get back to the rather more sensible objective of making sure that the hungry people of the world get enough to eat. And file this McKinsey obesity report where it belongs - in the bin. ®