'How a censorious and moralistic blogger ruined my evening'

So you’re at an Uber-hosted dinner for New York media high-rollers, and the Uber exec - Emil Michael, senior VP for business - you’re talking to goes off on one, suggesting he could hire a million dollar team to dig up dirt on hostile journalists and their families. What do you do? This - apparently - depends on who you are.

It happened to Buzzfeed editor-in-chief Ben Smith a week ago, and he let the sucker have it with both barrels. Which is what we at The Register would do, although I’m not sure we’d ever get invited to such a gig even by accident. And I’m pretty sure Ben Smith will be fixing his own dinners a lot more in the future.

Michael Wolff on the other hand would likely have gone with something more sensitive and caring. Wolff is something of a lizard in the lounges of New York media high-rollers. He is the man who invited Smith to the dinner, and by his own admission has been to hundreds of these "media meet-and-greets" over the years. As likely have most of the other media leaders he names as being present - these are "Mort Zuckerman, owner of New York's Daily News; Clear Channel CEO Bob Pittman; Huffington Post chief Arianna Huffington, New Republic owner Chris Hughes; and an executive at Ronald Perelman's company, Chris Taylor". 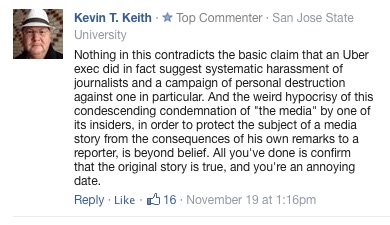 Wolff has many appreciative readers

This particular meet and greet, Wolff tells us, was part of a series of background meetings Uber organised with journalists and "influentials". "Everybody" (apparently) knows these are off the record and in Wolff’s eyes, Smith not knowing is the core of the problem. But there’s a bigger problem, as we’ll see.

We take it there won’t be any more of these briefings for a while, and that this was one aimed at influentials, but into which Wolff accidentally inserted a real journalist. As far as we know, nothing of interest has emerged from any backgrounders for journalists that took place before it. Are the journalists OK with a nice meal and access in exchange for a tacit off the record agreement? We hope not.

You can read the whole of Wolff’s screed for yourself (not forgetting the excellent comments), but if we cut to the chase it goes something like this: jumped up attack-dog blogger was so gauche he didn’t know the rules (i.e. these gigs are strictly off the record) and blew what was quite possible a "half-bottle of wine rant" out of all proportion. And, darn it, when "I contacted Smith and told him it seemed unfair that Uber suffers for my lapse" he ignored me and went ahead and published anyway. Wolff is also miffed that Smith didn’t "deal with the issue on the spot" and thinks it curious that "Smith made no mention of his conversation with Michael to me after the dinner."

There’s really so much wrong with that, and I really do not think that last paragraph in any way exaggerates Wolff’s not-exactly-an-apologia. Here is what a British reporter would have done, and if it takes a jumped-up blogger to do it in New York, well, shame on the rest of them.

Smith may or may not have known that such meetings are off the record, but the rules are if nobody tells you beforehand and some dolt spills his guts, you’ve got them, it’s on the record. Furthermore, if you’re the only actual person within earshot prepared to commit an act of journalism, it’s an exclusive. So you’re going to pad up to CEO Travis Kalanick afterwards and tell him one of his execs is shooting his mouth off, is out of line, maybe you’d better deal with it? Or you’re going to ask him about it in an open Q&A in front of the whole room? Right… That seems to be what Michael Wolff would have done. Goodbye story, goodbye exclusive, hello media facilitator. Any sensible journalist that gets that kind of gold keeps their mouth shut till they’re well clear, not least because exiting might otherwise be challenging. Making sure there’s a phone line between you and whoever’s shouting at you is common prudence.

Wolff would also have taken a worried call from Uber saying Smith was asking questions and hadn’t he told him it was off the record, and would then have called Smith asking him to kill the story. Because that’s what he did do. That was really very kind of him, considering he tells us he doesn’t know the Uber people apart from that one dinner. Kindness to strangers is one of his redeeming features.

In defence of Uber and its consultant Ian Osborne, the former David Cameron adviser who hosted the dinner, Smith seems to have been the only actual reporter there. The rest of them were high-level execs who would no doubt assume that the dinner was off the record. As would Wolff, whose recent career has been built on rubbing shoulders with these people, and who has negligible detectable reporting experience in his resume.

Next page: I know we said media media meet-and-greet, but...
Page: