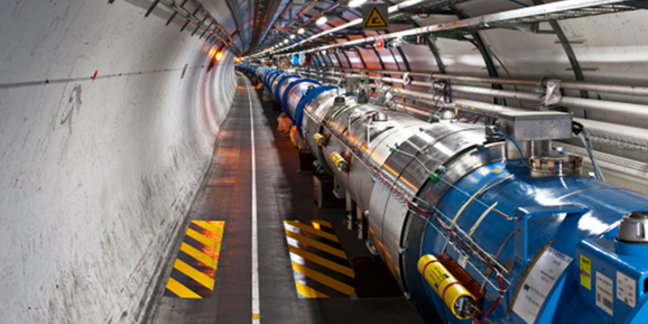 If you're not too busy this weekend, why not sit down on your sofa and try to find a Higgs Boson or dark matter?

The idea's feasible because CERN yesterday released data generated by the the Compact Muon Solenoid (CMS). “one of two large general-purpose particle physics detectors” at the Large Hadron Collider. CERN says the CMS' goal is “to investigate a wide range of physics, including properties of the recently discovered Higgs boson as well as searches for extra dimensions and particles that could make up dark matter.”

The data is a little old: CERN describes it as “approximately half of the total data volume recorded in 2010, the first year of LHC operations.” It's also rather complex. CERN says “it takes CMS scientists working in groups and relying upon each others’ expertise many months or even years to perform a single analysis that must then be scrutinised by the whole collaboration before a scientific paper can be published.”

“A first-time analysis typically takes about a year from start of preparation to publication, not taking into account the six months it takes newcomers to learn the analysis software.”

The CMS team has therefore prepared tools to help you with your exploration, plus a virtual machine in the notionally portable .OVA format (and recommends VirtualBox to run it).

The data release isn't unusual: CERN runs an open data effort. But the organisation and the CMS team says this is the “first batch of high-level, analysable and open data” from the instrument. ®

Axions still a no-show over at CERN Axion Telescope