BOFH: WHERE did this 'fax-enabled' printer UPGRADE come from?

Don't worry about that cable, it's part of the config 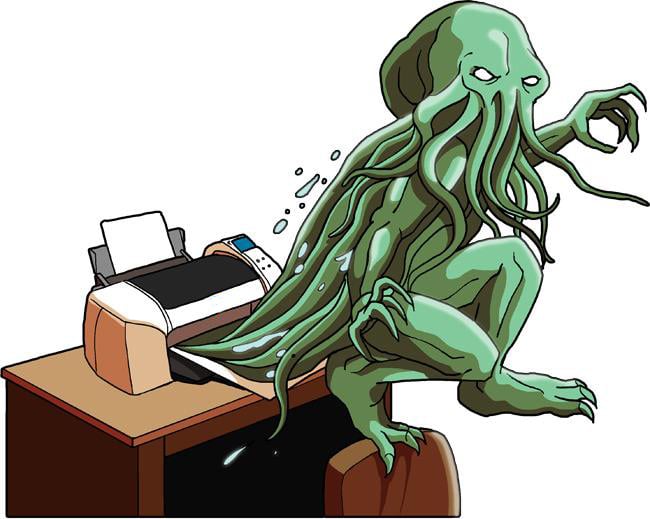 "This is exactly what I'm talking about!" I snap at the PFY. "Specifications created by people with absolutely no knowledge of what they need so they specify the absolute top-end kit just in case!"

"What's that, then?" the PFY asks, looking up from his game disinterestedly.

"AND they've specified it for the bloody fax line circuit as well!"

"I COULD use Cat-6," I reply, "but I know they're going to say they need Cat-7 and if they don't get it they can't guarantee colour registration or some other rubbish."

"Just use a purple patch lead or something - they won't know the difference!"

A couple of days later the printer guy wheels in a monstrosity, which is about twice the size and weight of our existing printer - which is being replaced for no other reason than they earn more per-page revenue off this one because the head Beancounter is no good at contract maths.

"Yeah we mostly do black and white," the PFY chips in

"Which could actually be useful," the PFY says, "we get a few laptops in occasionally..."

"Ah, so we can print from our TV remote controls?"

"Well THAT will be useful."

"Oh, it's just a facility - you'd need to get an upgrade to get the bin installed."

"Of course we would, how silly."

"Remote Administration and Print Accounting - an upgrade from the last version."

"Sorry, the interface is the same, but the accounting has been upgraded - you can have up to 64 boxes now."

"Yes, but you can put names on the boxes instead of numbers."

"And doing that comes with a 35-box penalty?"

"What about duplexing speed?" the PFY asks.

"Duplexing speed is 48 pages per minute, and if you want a duplexer we can install one within 10 working days."

"What do you mean IF WE WANT ONE. WE ALREADY HAVE ONE!"

"Well yes, but this is an upgrade, and not everyone wants duplexers so they were left out of the quote."

"So let me get this straight, you're giving us a printer with a bunch of features we're unlikely to use, a web interface which was probably developed as a prop for Blake's 7, which, if you go back in ANY submenu immediately logs out AND has a hierarchical menu organisation which was probably designed by a dyslexic moron with Alzheimer's, you've dumbed down the user accounting AND IT DOESN'T EVEN DO DUPLEXING!?"

"I can't take it back," he sniffs."It's been delivered to site. I've filled in the delivery complete form."

"Unfill it in..." the PFY suggests

"If that interface is as crap as the one on the printer you've probably just ordered a pizza and joined an online discussion site on yak herding! So take it back."

"Even I could, I couldn't, because your old printer will shut down soon."

"Well when I send the delivery complete form in, it connects to the printer remotely and deletes all the users. So that you don't get charged when we install it in another site."

"Another site... that needs 99 users and duplexing?" the PFY asks. "Another site that perhaps wanted to offload their crap printers on someone?"

"Uh..." he responds, getting the guilty hunted look that you usually only see in post-sales support people.

"Okay, we'll deal with that later. Meantime, plug the new one in before we start getting support calls."

"Sure. Now do you have a list of all your old users and their PIN numbers and account codes?"

"Don't you have that? Remotely?"

"Not after I fill out the delivery complete form."

"So we'll have to make up new ones and enter them by hand - on a touchscreen with a keyboard that's half the size of the last one?"

"There's a removable keyboard too."

"But that's an upgrade. We can probably get one in five working days though."

"Well I'm just warning you, if it's not Cat-7 the automatic feed probably won't work and you'll have to feed all your pages manually."

"So that other site was having paper feed problems as well?" the PFY asks quietly

"And anyway, apparently he couldn't wait for the freight elevator and decided to take the new machine down the stairs to get the paper feed looked at," the PFY says, directing the Boss's attention to a long red smear down the wall of the stairwell...