Analysis As you might expect, China's first global internet conference was a particularly Chinese affair.

There were few sessions, each dominated by pre-selected authority figures, lots of positive declarations, almost no criticism and little audience participation. In effect, the polar opposite of a normal internet conference.

Somewhat inevitability, coverage of the event has also led to polar opposites: the Western press focused on China's well-documented history of censorship, through which every word or announcement is filtered; while the Chinese press reprinted anodyne words of praise.

The truth of the conference was somewhere in the middle.

First, let's get two things out the way: yes, China has a country-wide internet firewall – the Great Firewall of China, referred to simply as GFW by those who increasingly visit the rising economic power and often forget that Twitter and Facebook simply won't work. And yes, China will often turn if off for specific areas on specific days – mostly conferences like this one.

And second, yes, the organizers did attempt to create and pass a Wuzhen Declaration summarizing the conference that ending up being trashed because it was produced too late (poked under hotel doors at 11pm, no less) and didn't give anyone time to work through its various issues, most of them cultural.

What Wuzhen actually represented however was two things:

Neither was particularly edifying. So while China invited in select leaders, most from the US business world, and subjected them to long and largely content-free speeches from its elite, those invitees said nothing about the enormous ethical issues that China's approach to the internet raises, or the controls under which they begrudgingly find themselves forced to work.

The most valuable aspect of this sizing up of how far each side is prepared to go in order to open the doors to a potential blizzard of money, came in a letter signed by 38 close followers of internet governance issues, which pushed for the Chinese internet community to recognize general internet principles, such as:

Internet governance professionals are not specifically in it to make money (although they can expect many more paid trips to Asia if they don't push things too far), but they do recognize a real-world fact: where the money is, the internet goes.

Witness the headlines recently about how much money Alibaba made in a single day during Singles Day (who'd ever even heard of Singles Day before?) and the glowing (occasionally not so glowing) profiles of Jack Ma.

Chinese coders have taken what the dominant US internet companies have done for a decade and built further and faster than them. And they have done so despite the Great Firewall of China. You could even argue thanks to it. The new breed of super CEO look different, and confident, and they speak Mandarin as a first language. 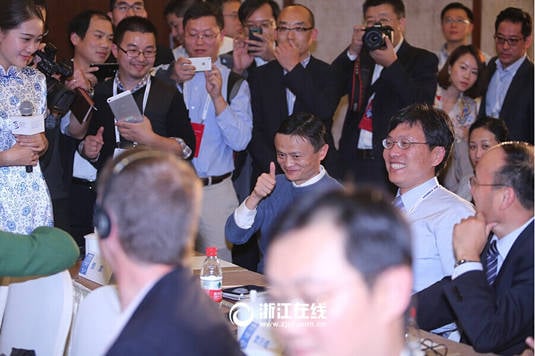 The question in terms of the internet is: how far is the current status quo willing to bend, knowing that being completely inflexible will simply see the internet they know overrun?

So far, it's unclear. The Wuzhen Declaration that wasn't is a stumble. It was produced too late and without enough cultural sensitivity – in this case on Westerners' behalf.

But while some are mocking point seven – "Widely spread the positive energy" – you can expect to see this sort of language creeping into future declarations.

It's a cultural shift – just not in the direction we're used to.