Do you have a cunning plan?

Board game review El Reg contributor Adam Fowler brings to these pages the first in what may become a series of board game reviews. Here, Adam dices with furry beasts in One Night Ultimate Werewolf. Watch out!

I've always loved card and board games. Growing up, when I wasn't glued to a computer of some sort, I'd play for hours with my Grandmother (who I have a feeling may have let me win sometimes). It may have been Canasta, or some wacky op-shop card game like Snafooey, but I enjoyed the experience so much. Part of the fun was the problem solving element, and the other part was interacting and spending time with the person I was playing the game with.

Fast forward 20 years or so, and I'm still making the time to play physical games. Working out puzzles and tactics is still a part of what draws me to sitting down at a table, but more so, it’s the interactions with the other players. Seeing what you can get away with, and how the person sitting across the table to you reacts under different scenarios is what fascinates me. It's a peek into seeing how other people’s brains tick ... and commonly, it moves on to manipulating those ways to win the game.

Do you like accusing others of lying? How about making up stories yourself, with the hope that nobody catches you out? What about playing a game in 10 minutes, beginning to end, while squeezing in a nap?

One Night Ultimate Werewolf, recently released by Bezier Games, could be just right for you. It's a different take on an older set of games known as Werewolf or Mafia, where there are two teams of people attempting to find the hairy-faced lycanthropes in the group. 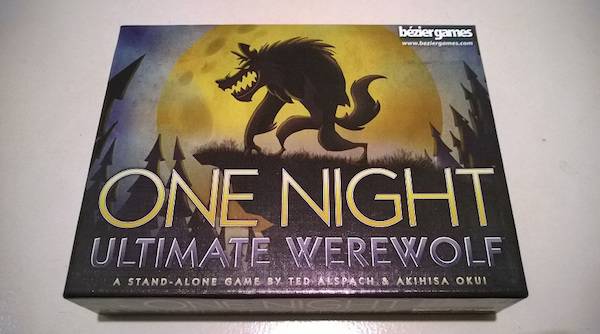 This is the sort of game that anyone can be told how to play two minutes before jumping right in. That said, it will take several attempts to really understand what is going on. I have a lot of respect for games like this, as people generally don't want to listen to several minutes of being told what to do – they just want to get on with it. Do you know what's really fun? Lying through your teeth to win the game. Immediately after, the whole table of opponents erupts when they find out you were full of it the entire time.

One Night Ultimate Werewolf is not your standard game. In fact, there's almost no game to compare it to. Instead, it sets a scene and relies on the players to make the game themselves. Don't worry, this isn't like Dungeons and Dragons where you can pretend to be an angry half-dwarf with a thirst for looting corpses. No, instead you're given a single simple role. 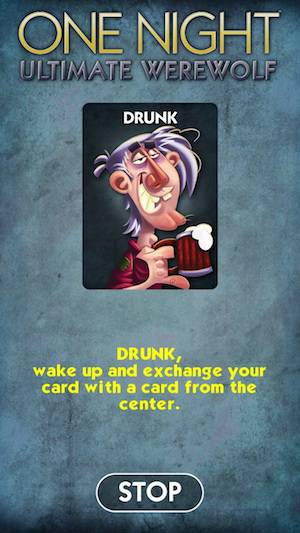 As it happens, though, werewolves eat villagers to survive. Not great for the villagers, so they decide to lynch someone in their town, believing them to be a werewolf. There might be a few hints as to who is a werewolf, but since everyone looks like an innocent villager going about their business, some detective work is required to hunt them down and give them a good flogging.

This all works by being given a single card that shows your role. There are also three extra cards placed in the middle that offers hints as to what role each player may have been dealt. The game is then played in two phases – night and day.

During the night, everyone closes their eyes. Then, one by one, each role is called upon (by either a moderator, or running a smartphone app) to do their job while all others keep their eyes closed.

Werewolves just get to look at each other, so they know who the fellow werewolves are. The seer gets to look at someone else's card. The robber swaps cards with someone else, then looks at their new role.

The troublemaker swaps two other cards without looking. Once action for all the various roles have occurred, the village wakes up. Which means it's time to kill a werewolf.