… Denmark, ahead of South Korea, with Blighty climbing the charts and the USA in 12th spot

The International Telecommunications Union (ITU) has issued its annual Measuring the Information Society report and found that Denmark is the world's most technologically-developed nation.

South Korea scored the win in the last version of the report, but is now in second. Results for other big Reg-reading nations include:

The ITU calculates those rankings by measuring the following eleven factors:

UK readers can rejoice in the report's finding that their home scored the biggest improvement in its ranking, “stands out as a prominent global hub for international connectivity, because of the strong internal demand and also its location”, and has some of the world's most affordable broadband.

The report also suggests that 2013 was a watershed year for fixed telephony, which grew in just five nations and will soon account for fewer connections than was the case in the year 2000. Mobile voice and data services, by contrast, continue to grow and 93 per cent of the world's population now has coverage. Even in rural areas, 87 per cent of people live within reach of a mobile signal.

Wired broadband connections have surged from 220 million in 2005 to 711 million in 2014, but the developed world has far better penetration than other regions.

All these new connections isn't great news for carriers: the report says in 2012 “total telecommunication revenue stagnated at around USD 1.88 trillion, or 2.7 percent of world GDP.” Better news can be found in data pointing to increased investment by telcos in 2012, following a nasty dip in 2008 and 2009.

The 270-page report [PDF] is full of interesting nuggets, perhaps none more so than the graph below depicting the number of teachers trained to teach with IT, and to teach computing. 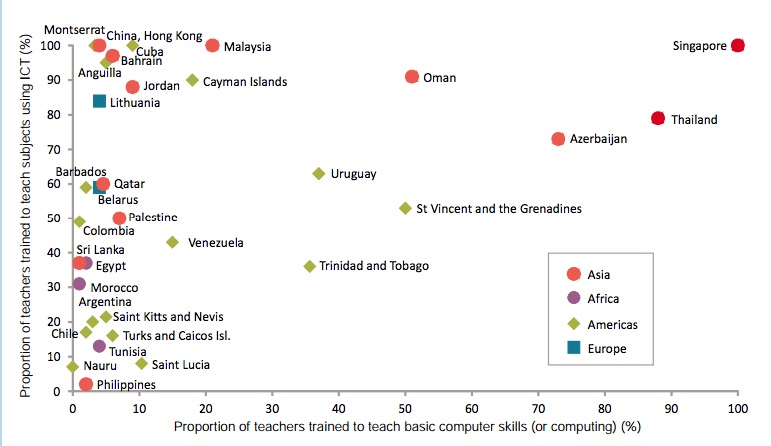 Teachers skill with IT around the world. Click here to embiggen.

It's no surprise that Singapore's out in front: Vulture South last week heard a minister of the city state explain a four-year plan to develop 2,700 analytics professionals to turn the nation into a hub for big data. ®

ITU ponders whether blockchain belongs in its security standards

20 Gbps air interface on the cards

Standards bods race to catch up with deployments