Vid After using a submersible robot to probe the frozen waters of Antarctica, climate and ecosystem scientists conclude its sea ice "may be thicker than previously thought."

"Our surveys indicate that the floes are much thicker and more deformed than reported by most drilling and ship-based measurements of Antarctic sea ice," the team reported in the journal Nature Geoscience on Monday.

"We suggest that thick ice in the near-coastal and interior pack may be under-represented in existing in situ assessments of Antarctic sea ice and hence, on average, Antarctic sea ice may be thicker than previously thought."

The survey was carried out by an autonomous underwater vehicle (AUV), dubbed SeaBED, which has spent the past four years surveying 500,000 square metres of ice thicknesses in the Weddell, Bellingshausen and Wilkes Land sections of Antarctica for British, US and Australian scientists. 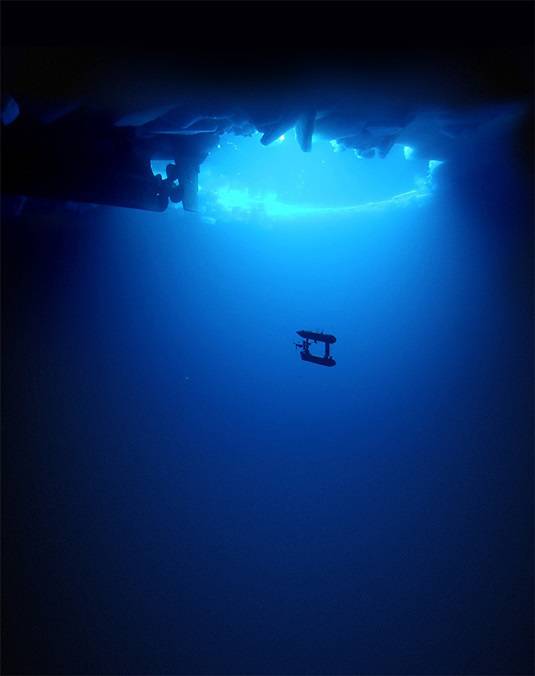 Dark in here isn't it?

The twin-hulled sub's design means the vessel stays nicely stable for photographic work, and to allow the sonar to be aimed precisely and return consistent data. SeaBED runs on a 1.2GHz Intel Pentium processor (hopefully without floating point issues) and uses Ubuntu Linux 8.04.

"Putting an AUV together to map the underside of sea ice is challenging from a software, navigation and acoustic communications standpoint," said Hanumant Singh, an engineer at the Woods Hole Oceanographic Institution (WHOI) who built the AUV.

"SeaBED's maneuverability and stability made it ideal for this application where we were doing detailed floe-scale mapping and deploying, as well as recovering in close-packed ice conditions. It would have been tough to do many of the missions we did, especially under the conditions we encountered, with some of the larger vehicles."

The 200-kilogram AUV has two buoyancy control units for stability, twin propellers on the rear and one on the belly to provide control, and uses upwards-facing sonar to map the thickness and structure of the Antarctic ice. Once it has been programmed, it scans the ice in lines running left to right like a lawnmower cutting across a garden. The data has been used to build a complex 3D map of the sea ice surrounding the continent.

"The AUV missions have given us a real insight into the nature of Antarctic sea ice – like looking through a microscope. We can now measure ice in far greater detail and were excited to measure ice up to 17 meters thick," said co-author Jeremy Wilkinson from the British Antarctic Survey.

We know a fair amount about the sea ice under the Arctic thanks to decades of submarine research, but the Antarctic is more of a head-scratcher: there's a significant land mass in the way, and climate scientists modeling a warming world are baffled by the behavior of the southern ice.

The data from SeaBED will now be combined with satellite, radar, and on-site inspections and drilling to build up a detailed map of the Antarctic's sea ice. These maps can then be used to help advance our understanding of just what is going on in the frigid zones of the planet's south. ®