Butch plasticky and the Sun-powered kit

Astronauts aboard the International Space Station have tested their new 3D printer – proving they can manufacture small parts while in orbit, somewhat.

"This first print is the initial step toward providing an on-demand machine shop capability away from Earth," said Niki Werkheiser, project manager for the ISS 3D Printer at NASA's Marshall Space Flight Center. "The space station is the only laboratory where we can fully test this technology in space.

Our solar-powered home in low-Earth orbit took delivery of its microwave-oven–sized 3D printer in September, and it was installed by Barry "Butch" Wilmore, the Expedition 42 commander on the ISS, last week. Using instructions sent up from ground control the machine has made its first component – a faceplate for the printer itself. 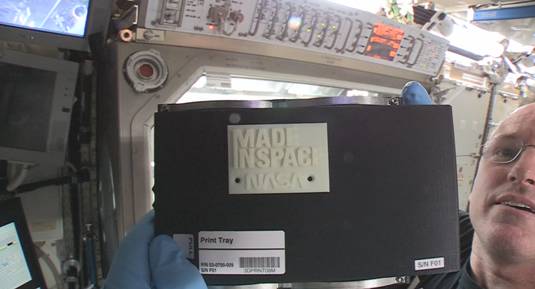 Butch and his big part

"We chose this part to print first because, after all, if we are going to have 3D printers make spare and replacement parts for critical items in space, we have to be able to make spare parts for the printers," Werkheiser said.

"If a printer is critical for explorers, it must be capable of replicating its own parts, so that it can keep working during longer journeys to places like Mars or an asteroid. Ultimately, one day, a printer may even be able to print another printer."

With an uncharacteristic lack of flair, NASA has named the printer "3D Printing In Zero-G Technology Demonstration", and plans to use it more. The first printing attempt ended up getting stuck to its substrate and the successfully printed 3D part is now scheduled for a return to Earth to check if it has the same properties as one produced at ground level.

"This is the first time we've ever used a 3D printer in space, and we are learning, even from these initial operations," Werkheiser said.

"As we print more parts we'll be able to learn whether some of the effects we are seeing are caused by microgravity or just part of the normal fine-tuning process for printing. When we get the parts back on Earth, we'll be able to do a more detailed analysis to find out how they compare to parts printed on Earth."

While an encouraging start, there's a long way to go before NASA can start using 3D printing as a serious alternative to resupply by rocket. This printer uses a basic plastic feed that isn't much good at building anything useful apart from a few knickknacks.

3D printing with plastic is relatively simple. Doing the same thing with metal, then separating it from the substrate and grinding off the connection points safely, is a lot harder, produces lots of floating debris, and won't be seen on the ISS in the foreseeable future.

Nevertheless, this is an important first step, and it's going to be interesting to see how the 3D-printed object in space compares to terrestrial printed products. NASA says it suspects that the bonding strength of the plastic may be stronger in space, and it's long been suspected that the absence of gravity could be beneficial to manufacturing in this way.

We may be a few centuries (and a couple of basic physics and chemistry constraints) from a Star Trek replicator, but if 3D printing is viable in space it could open up a host of fascinating options for future missions outside our planet's gravity well. ®