Once the default distribution downloaded and was written to SD card, it worked OK. There were several issues that I felt need to be addressed. These included wireless (a potential key selling point) not working out the box and just the worst UI design I have ever seen, as though cobbled together by a colour-blind coder with zero taste or UI experience to just get it out the door.

The gaudy vomit green background gave me a headache. The official OS is just a badly respun version of Debian. Given time, it could have been so much more. There is plenty of software pre-installed for Arduino hacking and circuit design, but tellingly limited applications for the average user. Le Maker even includes a cheeky link to the official Pi store.

The big question is does it work with XMBC or Kodi as the media platform is now known. Unfortunately, the RPi and Banana Pi are not “plug compatible” in software terms.

Sure, the architecture may be ARM, but that’s where the similarities end. There is an XBMC/Kodi build, but according to several users the experience can only be described as passable. This is due to the hardware acceleration not being enabled nor software-optimised, unlike the Pi.

The GPU is an ARM holdings based unit, compared to the Broadcom found in the Raspberry Pis. This is one of the biggest issues. Such a small community only has a certain amount of people willing to attempt such image building and tweaking. In reality, when using Kodi, the additional CPU and RAM are consumed trying to do the decoding in software.

Other gripes include the difficulty of getting hold of a device through official retail channels as well as getting any kind of after-sales support. 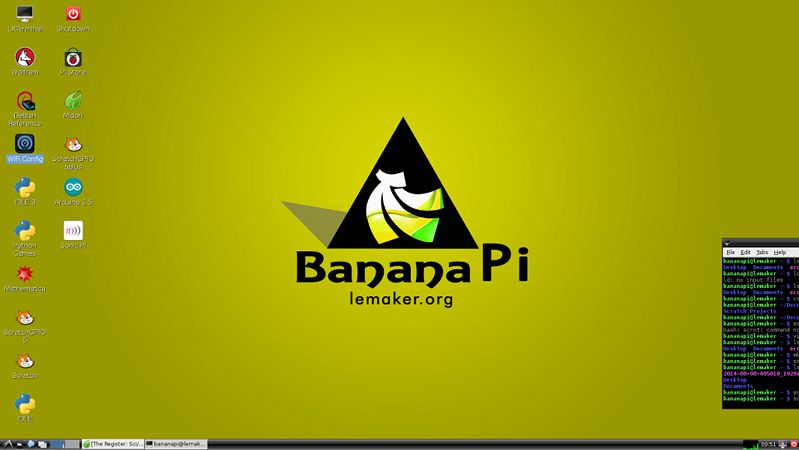 A gaudy green screen to give you a headache

When you get it, you literally get just the PCB, nothing else. Not the biggest of issues, but it isn’t unreasonable to expect even a one-page document detailing where the images are and such.

Another challenge is availability. I got mine before the Black Friday madness, from Amazon, priced at £35.98. There seem to be zero official suppliers, rather it's a case of "someone has some – buy 'em quick."

In summary, the board itself is interesting at the price point, especially with all the extra toys. However, it does feel rushed. The website is littered with mistakes and there's a lack of documentation, which coupled with the dubious download mechanism make this a box that's only for the real hardcore SBC tinkerers. ®

Raspberry Pi 3 Model A+ support to arrive in Linux 5.1