The United Kingdom's National Museum of Computing has begun the process of booting up a replica of the Electronic Delay Storage Automatic Calculator – aka EDSAC – a computer commissioned in 1949.

As The Reg has previously detailed, EDSAC has a distinguished place in computing history because its design influenced that of LEO, a British business computing effort that was probably superior to IBM's S/360.

EDSAC's initial tasks were assisting scientists, a role it fulfilled well enough that the Museum says it assisted in the winning of at least one Nobel Prize.

The machine was, of course, laughable by today's standards. EDSAC ran at 500kHz, could process 650 instructions a second and boasted two whole kilobytes of RAM. Mercury delay lines served as memory.

The Museum says that hardware “was over two metres high and occupied a ground area of four metres by five metres.”

The University of Cambridge records that programming EDSAC required use of a “5-track teleprinter paper tape via an electromechanical tape reader running at 6 2/3 characters per second.” Output was “delivered via a teleprinter at 6 2/3 char/sec.” 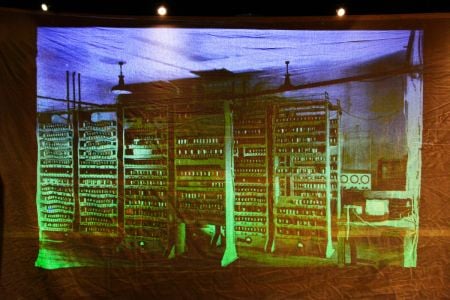 The new EDSAC Gallery at the UK National Museum of Computing

Recreating EDSAC to the point at which it could be revealed to public and its clock restarted, as happened yesterday, required “two years of research and re-engineering by a team of about 20 volunteers.” Another year's work will be required to complete the replica.

The rebooting ceremony was therefore really about opening a gallery at the Bletchley Park Museum dedicated EDSAC. If you'd rather not visit and instead get your hands dirty, Cambridge hosts an EDSAC manual here and the University of Warwick offers simulators and software here. ®