Tony Hey is Vice President of Microsoft Research Connections. Gyuri Papay is a senior research fellow at the IT Innovations Centre at Southampton University. The Computing Universe, according to the authors was inspired by Richard Feynman’s lectures on computation. It is designed to be understood by high school students and undergraduates. 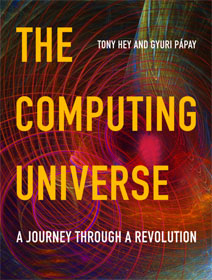 The book begins by defining computer architecture and introducing the concepts of hierarchical abstraction and universality which underlie computer operations.

That stated, we have an introduction to the pioneers of computing: Babbage, Von Neumann and Turing are all explained as are many lesser known pioneers. The book is a popular science work rather than a textbook and is well laid out with pictures and separate short biographies of the many names in computer science. It is explained how the development of 20th century computing is linked to ballistics and code breaking and how the early machines were developed around World War II.

It is is revealed that the first computer bug was a live moth trapped in a machine’s relays. There follows a short history of computer languages along with dread warnings:

“The use of COBOL cripples the mind: Its teaching should therefore be regarded as a criminal offence.”

There are some terrific photos of programmers c.1970 when it was de rigeur to look like a member of the Grateful Dead. Also, you'll find many confessions of the terminally nerdy:

“If I had not discovered software, I would have become a musician or priest.”

There is a chapter on algorithms, which quite frankly went in one ear and out the other, maths not being a great passion or subject of mine.

But The Computing Universe is a fascinating book about a vast and sometimes impenetrable subject...the history lesson travel onwards, through UNIX, open source, the research done at ARPA and Xerox that introduced the PC revolution... right up to Bill Gates and Steve Jobs. There is also a chapter about the development of games from a hobbyist indulgence to a multimillion dollar industry. The history of how networks became worldwide is explained, then the rise and fall of such dotcom celebrities as Amazon, Google and Netscape are discussed.

Next, the origins of Trojan horses, viruses and botnets are outlined. Spam is apparently named after the Monty Python sketch, a piece of nerdy trivia I never knew before.

The authors recount how Moore’s law means that computers became ever more powerful, recalling Deep Blue’s victory over world chess champion Gary Kasparov in 1997 and WATSON’s jeopardy victory in 2011 as advancements in computer performance which still fall way short of any definition of artificial intelligence.

The book should end with a section about the future of computing, introducing new material such as graphene which may exceed the limitations of silicon and a fascinating description of attempts to develop a quantum computer; and I would tell you what a great book this is...

Bizarrely, however, there is an essay of computers in sci-fi tacked onto the end, which is totally irrelevant and only detracts from all that has gone before. I can only assume the authors have spent too much time in front of their screens and need to get out into the real world a bit. It is a truism that many nerds enjoy sci-fi, but rarely have scientific writers been so smitten as to risk their credibility over it.