Randall Munroe: The root nerd talks to The Register

XKCD creator on life, the universe and everything

Interview There are a million easy ways to get famous on the internet - or perhaps they're all one way but it's been done a million times. 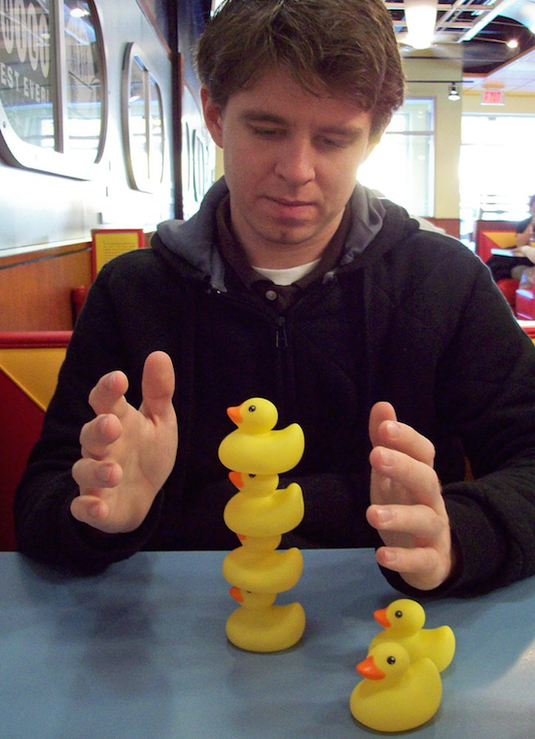 If you're a budding celeb in search of glory, all you need to do is shoot a sex tape, like Paris Hilton - or maybe do a Miley Cyrus and unleash a vast torrent of semi-clad selfies. Perhaps you could follow in Kim Kardashian's footsteps and break the web using only your buttocks. In fact, a bit like Kim, you might consider doing all three of these things.

But few fame-seekers today would contemplate embarking on a career path that involved leaving a safe and prestigious job at NASA and drawing loads of stick men. Surely no-one makes it big doing that?

But that's exactly how Randall Munroe became one of the most famous nerds in the world. His XKCD comics have become a geek lingua franca, used almost like emojis by his hardcore fans. Lost a password? Munroe's stickmen can express your pain so you don't have to. Unsure of how to persuade a lady to open her heart and change her Facebook relationship status? Randall's got your back.

Now his book What If? has surged to number one on the bestseller lists in both Blighty and the US, there's no doubt that Munroe has become a new type of celebrity.

"The nice thing about being on the internet is that you're not as recognisable as someone that's been on TV," he says when we meet in his publisher's plush London offices. "Lots of people in aggregate might know who I am, but they are spread around across the country and the world."

We meet just a few days after his first major television appearance on The Colbert Report. He confesses that he can't bring himself to look at audience numbers, because he's "horrified to think" how many people saw him.

In the past, someone like Randall Munroe would never have made it past the posh bouncers who stand to either side of the publishing industry's velvet rope. In the internet age, of course, you don't need to ask anyone's permission to start showing your work to the world.

Munroe was working at NASA when he realised that his webcomic was "making more money than the day job". So he quit.

"I have always had trouble paying attention," he adds. "When I was supposed to be at work, I'd be doodling. But then when I was home, trying to draw, I would be working on math problems. I never end up doing exactly what I should be doing at at any given time."

He claims to have not "worked on anything big enough to make a big mistake," which gave him plenty of time to fool around - something he subsequently made a career out of.

Once, he was working on navigation algorithms and managed to program a robot to tow him around the NASA offices on a wheeled swivel chair.

"I then programmed in an algorithm which sent it wandering around the building at high speed," he recalls. "It towed me around the door, through the hallway and then eventually to the other side of the building. I got to meet a whole bunch of new people when I got there."

Funnily enough he left soon after, when XKCD started to become popular back in 2005. Even though he had never even taken art lessons at school, Munroe's stick figures chimed with the nerd culture of the internet, in which a grab bag of scientific knowledge is way more impressive than a sixpack of abdominal muscles.

Next page: 'I didn't know anyone else cared about Linux commands'
Page: