Massive attack stung film studio ahead of The Interview release 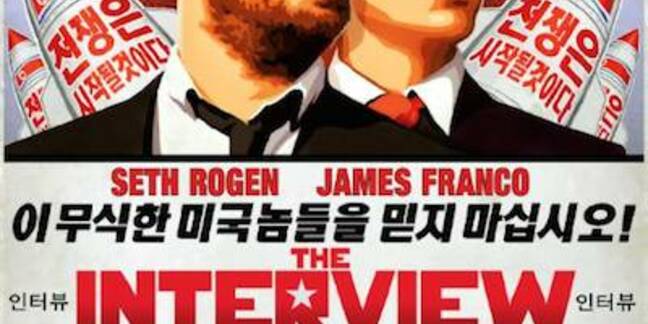 According to Re/code, which cited insiders, the company was yet to determine whether Nork hackers, possibly operating from within China, were behind the attack.

As The Register previously reported, Sony Pictures' official response has been terse, with the struggling movie maker merely confirming it was probing the security breach of its systems.

Earlier this week, Sony Pictures staff were told to disconnect their computers and personal devices from the company's network, following the attack.

A bunch of malefactors labelling themselves Guardians of Peace claimed responsibility for violating Sony Pictures' computer system security and vandalising its intranet.

By Friday, it was reported that staff at the firm were forced to do their job with pen and paper and that the mess could take up to three weeks to be cleaned up.

Re/code noted that the hack attack coincided with the upcoming release of The Interview starring Seth Rogen and James Franco.

Here's the blurb for that movie taken from IMDb:

Dave Skylark and his producer Aaron Rapoport run the popular celebrity tabloid TV show "Skylark Tonight." When they discover that North Korean dictator Kim Jong-un is a fan of the show, they land an interview with him in an attempt to legitimize themselves as journalists. As Dave and Aaron prepare to travel to Pyongyang, their plans change when the CIA recruits them, perhaps the two least-qualified men imaginable, to assassinate Kim Jong-un.

North Korea couldn't stop us!!! Here's the newest trailer for The Interview!!! http://t.co/EAICoJJiFi