Firm 'fesses up: Last-minute prezzie-hunters could be disappointed

Updated Amazon has suspended next day delivery in Blighty after reporting its busiest day on record.

This decision could mean the families of last-minute present hunters will go without gifts on Christmas Day, said a Reg source, who says he was told express delivery would not begin until the New Year. Amazon denies this and claims the service will be up and running within "the next few days".

On Black Friday last week, most Brits were shocked to witness riots in the aisles as shoppers battled to buy heavily discounted goods.

The frenzy was equally intense online, with Amazon flogging about 64 items per second to achieve a mammoth 5.5 million sales - the most it has ever racked up in 24 hours across Blighty.

Now it has quietly stopped next day deliveries without explanation.

Normally, customers who buy items from the online emporium are offered the chance to take a free trial of Amazon Prime, which offers express delivery.

Here's what happened when we tried to buy a new hardback book: 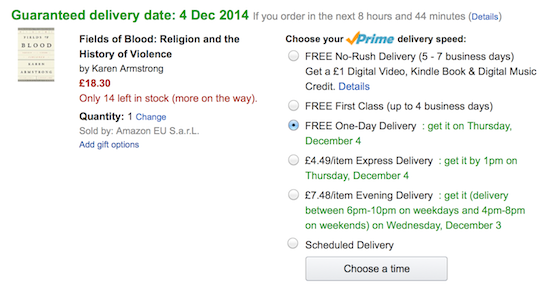 We were told the quickest it would arrive would be three days, despite the promise of next-day delivery still being on the website.

We also tried to buy a Sonos Soundbar and an iPad Air, neither of which offered next day delivery.

Reg readers also sent us transcripts of online conversations with Amazon sales reps. One Amazon worker told a Reg fan that next day delivery would not resume until January.

"Due to some high volume of orders in this Christmas season, delivery time frame is being extended for some in demand items," the rep told our reader. "I'm very sorry about this. Next day delivery will probably not resume until January 2015."

Xavier Garambois, vice-president of EU retail at Amazon, was flabbergasted at the size of the Black Friday sales rush.

He said: "Ever since we introduced Black Friday to the UK in 2010, sales have increased year-on-year but this year really has surpassed all of our expectations.

“Black Friday and Cyber Monday are increasingly influencing EU online shopping, particularly in the UK,” said analyst Michelle Beeson. “These traditionally US sales days may seem irrelevant now, but retail heavyweights like Apple and Amazon have a track record of influencing consumer behavior and setting new standards in Europe.”

We have asked Amazon for comment and will update this story when/ if they respond.

Last week Boris Johnson suggested that online retailers might want to start using drones to deliver his shopping. Suddenly old BoJo doesn't seem so bonkers after all, on this subject at least. ®

Since the publication of this story, Amazon has been in touch to say:

As a result of the unprecedented number of orders we received during Black Friday Deals Week, some deliveries will take a little longer than you would normally expect. We advise customers to check the estimated delivery date on the "Review Your Order" page during checkout for details of when they can expect their order to arrive. We expect usual service to resume in the next few days.