Meet the man who accidentally created the smartwatch hype

Interview The wearables bandwagon rolled into town this year – heralding the arrival of glossy and expensive new wearable timepieces. Android Wear and Apple’s Watch have grabbed most the headlines, but I suspect that come Christmas morning, more people will be unwrapping a Pebble than the glitzier rivals.

We caught up with Pebble’s founder, the chap who arguably started the wearable hype, Eric Migicovsky, recently.

Back in 2008, Vancouver engineering student Migicovsky was looking about for something that could communicate with his BlackBerry. Unable to find one, he built his own prototype. A few hundred InPulse watches were shifted but unable to find funding (despite state support) in Canada, he looked to the US instead. He asked for $100,000 in support on Kickstarter for a successor. The appeal blew past its target and raised over $10m - Pebble was off and running. In July 2013 it became a real commercial product and sold out within the week.

For this Christmas, the Pebble is finally getting a serious sales push in the UK. Prices start at £99 for something that does one or two things really well and on a battery that lasts five days. Android Wear watches are much slicker – but barely make it through a day. And priced at £199 (for, say, the Moto 360), are they really twice as good? Or in Apple’s case, well – who knows? Apple hasn’t set a date or price for the UK release of the Apple Watch yet.

Not surprisingly, the Pebble founder thinks sticking to the basics is a more durable strategy.

“Our perspective is that for a device people are going to wear 16 hours a day, it has to be something that meshes into your life. It has to be useful, and not force you to change your habits.”

It helps that it’s considerably more comfortable than the rivals – and Pebble makes great virtue of not being a high-spec wonder wearable on its website. 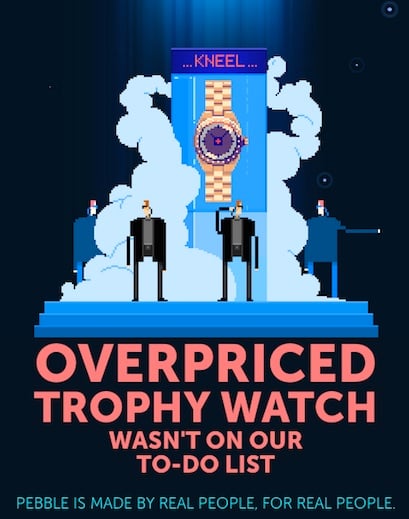 The Pebble designers have eschewed colour touchscreens and smartphone-class processors, but they have a strong lead with a base of 18,000 enthusiastic developers. The Pebble hit the streets with an API – see our programming guide here – and it’s the ecosystem that gives it a serious advantage. Volume matters for developers, and at £99, Pebble looks a much more mass-market proposition than Wear or Apple Watch.

“The features we’re focussing on are notifications, music control, sports tracking and control your home through NEST. These are things people want to do and Pebble excels at that – rather than entering data or viewing photos.

“We’re not out to build apps that people use once a week, but every day. This is not a revolution - putting a Pebble on your wrist won’t change your life.”

The aggressive price also means a lower margin for Pebble.

“Yeah, but we’re in it for the long haul,” he says, “We’re building a platform and an ecosystem.”

Fitness tracking was added through a software update recently – although some kinks need to be ironed out. One Sunday recently while wearing a Pebble Steel, I knocked up two meals – one a fairly bog-standard Sunday roast – and found I’d clocked up 3,000 steps... without leaving the kitchen. It turned out the steps counter was counting an arm flex as two steps. (Thank you, Pebble, I’ve never been fitter).

When the bugs are fixed, Pebble should be able to take on the other hot wearable category, the fitness band. The basic Pebble is priced slightly higher than fitness bands from Nike and Jawbone, but of course, you get a watch with it. Pebble doesn’t see Jawbone as a direct rival: presumably there’s a tacit understanding that Jawbone isn’t going to make a watch, and Pebble isn’t going to make a fitness band. In September, Jawbone opened up its UP band to third parties, including Pebble.

Migicovsky is generous about Wear, but questions the point of replicating an expensive and sophisticated bit of kit on your wrist.

“Android Wear uses the same processor that’s inside an Android phone. That strikes me as a little bit like having a smartwatch on your wrist. But I don’t believe there’s too much innovation happening when you make an app that runs on the phone itself.”

As for Apple: “They took an interesting perspective. It’s quite an expensive watch and an upmarket and fashion-centric device. And again, that invokes a really different set of capabilities. But Pebble is cross-platform, waterproof, the screen is always on but the battery lasts seven days. That’s our perspective.

“We’re also better at caring about what users want to see: we publish our firmware updates every two weeks. That’s what a small user-focused company can do,” he says.

“Over seven years, the features people use a lot are features we excel at.”

And it should find niches. He cites a Type 1 diabetes blood glucose level monitoring app (CGM) that in a month has gained over 1,000 users. 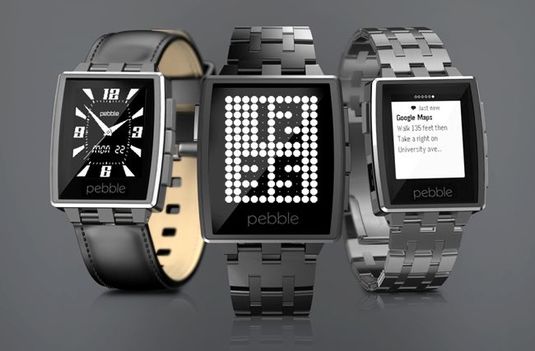 I’ve been sceptical that expensive Wear watches will ever be more than a niche and nothing has changed my mind.

“Give me a wearable that I didn't ever have to recharge, or only needed to recharge once a month, that cost under £20, and that gave reliable notifications of calls or messages received on my phone, and instantly gave me a zoomable map - and maybe then we're talking,” I wrote when Wear launched last March.

If anyone gets to that price point and battery, it’s going to be Pebble. It could surprise a few pundits yet. ®