Forget containers – are you ready for a platform?

DockerCon EU Linux container wrangler Docker rounded out the first day of its DockerCon EU conference on Thursday by unveiling three new services that represent the next steps in Docker's transition from toolset to full-fledged platform.

"We're incubating a series of projects separately from the core runtime," Docker cofounder and CTO Solomon Hykes explained during his Thursday evening keynote. "The core runtime is focused on stability. These new projects, these new tools, are focused on attacking a new problem in an independent, orthogonal way."

The trio of services are designed to make it easier for admins to provision and orchestrate distributed applications made up of multiple services running on independent Docker containers, which Hykes said was the one feature most requested by Docker customers.

The first of the three, dubbed Docker Machine, automates the process of provisioning the Docker Engine onto any host – whether it's a local laptop, a data center VM, or a cloud host – eliminating much of the manual configuration and scripting that was previously necessary to get Docker running in production. 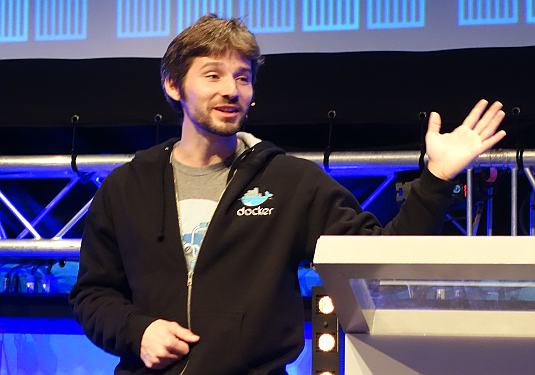 Further building on those capabilities is the next service, Docker Swarm, a native clustering service for containers. Docker Swarm can create a resource pool from multiple Docker Engine hosts and then automatically schedule workloads according to their resource requirements. It can also automatically rebalance workloads in the event that hosts fail.

Hykes hastened to add, however, that Swarm would not be the sole clustering option for use with Docker – which he described as Docker's "batteries included, but batteries removable" philosophy.

"The goal is not to create the clustering solution that does out of the box everything for everybody," Hykes said. "Instead, what we're trying to provide a standard default implementation that's good enough to be really sweet to use out of the box, and then make it really easy to swap out that default backend and bring in your favorite backend."

As an example of that, Hykes added, Docker is partnering with Mesosphere to make Mesos a first-class citizen within the Docker ecosystem.

Next page: Make that two and a half services
Page: