NASA’s Mars-hopeful spacecraft Orion has successfully blasted off from Cape Canaveral on its first test flight, launching on time at 12.05pm GMT. 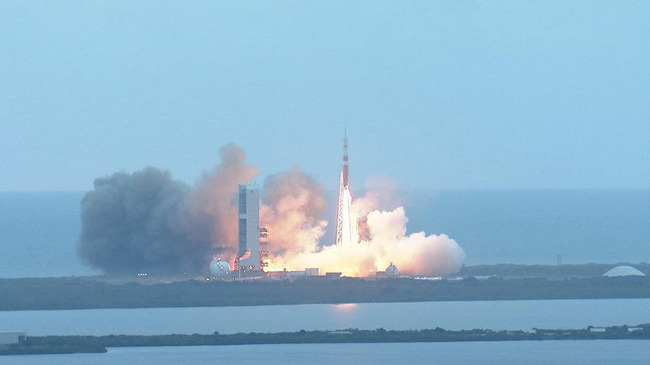 The agency’s first step towards reviving its manned space exploration programme went off without a hitch today, after a number of glitches yesterday caused the original launch window to be scrubbed.

Just over four minutes into the flight, port and starboard boosters separated as planned and then the first stage separation was achieved. Shortly after, the first two milestones of the test flight were achieved, when the ship jettisoned its launch abort system and spacecraft adapter panels on cue.

Now Orion is in its preliminary orbit, having separated from the second stage, ahead of a second elliptical orbit with a peak altitude of 3,600 miles to go through the lower Van Allen radiation belt and then back through the atmosphere at 20,000 miles an hour to land safely in the Pacific Ocean.

The spacecraft is unmanned for this test, but NASA hopes that the reusable craft will eventually carry astronauts to the Moon, asteroids and Mars. To achieve that, Orion will need to be able to withstand the radiation in deeper space and temperatures of thousands of degrees Fahrenheit on its re-entry into Earth’s atmosphere.

This flight will test the ship’s huge heat-shield at around 4,000 degrees Fahrenheit when it arrives back to Earth around four and a half hours after its launch.

The high elliptical orbit should also test its existing shielding’s ability to protect sensitive electronics from the radiation outside the protection of the highly charged particles of the Van Allen belt.

Finally, the return to Earth will test the eight-parachute deployment system that slows the craft’s descent to let it drop safely into the ocean.

Throughout the flight, NASA’s mission control will be testing avionics and navigation systems, hoping to improve the craft for its first planned unmanned mission to the Moon, due in 2018. ®