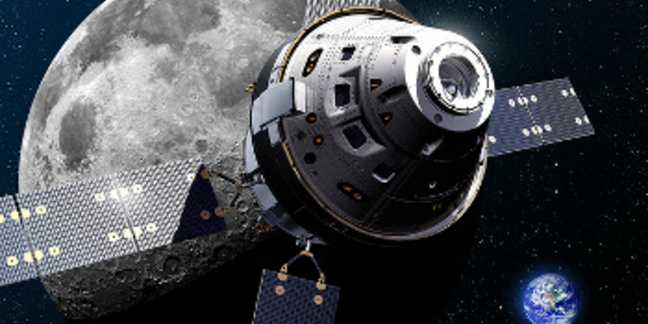 The Orion spaceship has landed safely in the Pacific Ocean, off the coast of California, just a mile and a half off-target, after its maiden voyage in space.

NASA’s new manned mission capsule operated almost entirely by the book today, passing each of its test flight milestones more or less on time, and dropping back to Earth as planned.

The four-hour and 24 minute flight took in two elliptical orbits of Earth, with a high altitude point of 3,604 miles, a pass through the lower Van Allen belt, atmospheric re-entry at 20,000 miles an hour and 4,000 degrees Fahrenheit, and an eleven-parachute deployment landing system to finish up drifting gently down to the sea.

Splashdown! #Orion completes a critical step on our #JourneytoMars.

Although built to eventually take astronauts to Mars, Orion flew unmanned this time. In order to gather as much data as possible about its first flight, NASA fitted it with 1,200 sensors both inside the cabin, and throughout the spacecraft.

The sensors are there to gauge the ship’s huge heat shield, radiation levels, and the exact conditions of the trip, so that engineers can fine-tune the reusable craft ahead of its first mission.

NASA is also testing the capsule’s avionics and navigation and its many separation stages, including the jettison just before orbit of the new launch abort system and the spacecraft adapter panels.

The agency and the US Navy are currently pulling the ship out of the water for NASA crews and engineers from manufacturer Lockheed Martin to analyse.

In 2018, NASA is hoping to send Orion on an unmanned mission to the Moon. And if that goes well, the space agency is aiming to get people going on a mission to Mars in 2021, over 50 years after it managed to make human footprints on the Moon. ®

Vid If nothing goes wrong with biggest rocket ever, which is only a little over budget

Skyrora seeks spaceport operators for its next three rocket tests