Tweeting for n00bs plus fraudsters and fakes

The Biographical Dictionary of Literary Failure

Literary greatness is often bestowed posthumously and many literary greats and nonentities have endured lives of spectacular failure while many readers vicariously enjoy tales of squalor and deprivation without the need to go there... From Aristophanes to Irvine Welsh, writers have found rich pickings amongst the unfortunate.

The Biographical Dictionary of Literary Failure is a scholarly trawl through the tragic underbelly of the literary canon.

The introduction by Andrew Gallix, editor of 3:AM Magazine, is a fascinating essay of literary failure and failures in literature.

CD Rose, according to his publisher's website, is an educated person universally acknowledged in parts of England as the world’s pre-eminent expert on inexpert writers. The Biographical Dictionary of Literary Failure is a “monumental accomplishment” and though the world is weary of publisher's blurbs, this one turns out to be true.

The dictionary contains short biographies of some of the more tragic examples of literary catastrophe such as Stanhope Barnes – who left the manuscript of his magnum opus, Here are the Young Men, on a train – and Ernst Bellmer, the bibliophage, fated to consume his own works. 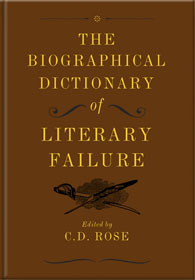 The Biographical Dictionary of Literary Failure is full of graphomaniacs of every shade and persuasion, authors who travel forward in time to steal titles from post-punk musicians: not only Barnes and Joy Division, but some pesky failures have been stealing titles from Julian Cope and Richard H. Kirk... or so it seems.

CD Rose has conducted extensive research, so much so that even aficionados of obscure literature such as myself might never have heard of any of the subjects, but that doesn’t render their failure any less fascinating. There is Monsieur Fouquet, whose father pulped his unsold print run and recycled them into perfumed envelopes. There is the author of Oncle Cauchemere, Maxim Maksimich, who mysteriously died in the Hotel Jarry – and whose fate curiously mirrors that of Pasolini.

Readers may take some of these biographies literally, but as the tales grow taller and the yarns are spun wider, even the naïve can have no doubt that these inspiring struggles against futility are not exactly bona fide. They're based on the vicissitudes of the subjects' lives or some vague approximation, and fact often becomes fiction and vice versa.

You can almost hear some literary greats turning in their graves at the thought of being omitted from this most comprehensive tome.

CD Rose is a worthy candidate for the Nobel Prize for satire and will be mentioned in the same hallowed breath as Nate Waronker and Ivan Yevachev.

The Biographical Dictionary of Literary Failure is a magisterial work, the final word on the subject and will be the standard reference work for decades to come. This book would appeal to all literary failures, literary non-failures, literary semi-failures, dilettantes, voyeurs and lovers of humour. MD ®