Rolling the ATTACK DICE in King of Tokyo

A fun cardboard beat 'em up in this mega monster brawl

Board game review There's something a little bit magical about dice. Yes, physically they are plain six-sided plastic cubes but it's not about their physical form; it's what they represent.

The result of throwing dice is an unknown, representing all the possibilities just by how they land. A simple game like Yatzee, using five plain dice and a score pad feeds off this magic. Every throw of the dice makes you feel powerful and strong, hoping to hit that five of a kind. The odds of that happening are a surprisingly unlikely one in 1,296. But it's still possible.

I believe that's why dice are so popular in board games, as they provide a way of providing random outcomes, while seemingly putting the fate of the world into your own hands. 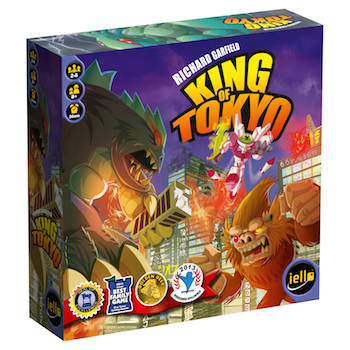 A loud *roar* turns the citizens of Tokyo's heads upward. Gigazaur, a giant green reptilian creature enters Tokyo City, and one can safely assume he's not here to make friends. Look out though, a *robotic dragon noise* echoes through the skies. MekaDragon is also here, and wants to rumble.

Next an alien in a giant space suit, also robotic, wants a piece of the action. Put it this way, there are six giant monsters, mostly robotic in some form, and they either really like, or really hate Tokyo. They want to be the king ... and that means it's time for a mega monster fight!

King Of Tokyo has a few simple ideas going on but implements them quite fittingly for an interesting experience. You start off as one of six giant monsters, which sets out the theme of the game nicely. The other components are of decent quality which add to that feeling of playing something special.

There's no real playing area in this game, just a square bit of cardboard representing Tokyo. Your goal is to be inside Tokyo the longest, terrorising its citizens and destroying its buildings.

Being the enormous ape with one robotic eye called "The King", or a cute little bunny controlling a massive rabbit-shaped mech with the lacking-imagination-name of "Cyberbunny" makes no difference to the game, apart from choosing the character that looks the coolest. The game is about getting 20 victory points, or being the last surviving monster – whichever comes first.

Each player has their scoring card for points and health, along with a matching cardboard figurine of their doom-bringer. Once everyone stops reliving their childhood by making their monster stomp and dance around (which can take a while), the game begins.

You're given a handful of black and fluorescent green dice (in this case six, which everyone knows is a metric handful) to throw down. For the less gifted dice thrower, this may take more than one attempt to accomplish, rather than excitedly skimming a few off the edge table. The results of the dice let you do a number of different things:

Attack – lets you beat up other monsters.

Energy – gets you energy cubes, the standard universal currency of monsters.

Heal – gets you some health back, or, as I like to think of it, monsters eat human hearts to feel better.

Points – earns you a few victory points if you get at least three numbers the same.

Next page: The kick inside
Page:
Corrections
17 Comments

Zuck's bucks have no luck, for now

All your Health Data are belong to us

Having dated for a while, Xilinx gets serious and buys Solarflare to raise its networking game

Plus: Introverts' must-have Duplex – that restaurant robo-caller – served up to Pixels

Why should you care about Google's AI winning a board game?

Water cooler This is actually a pretty big deal, let us explain why

Aliens and sinister AIs from the mind behind the greatest TV show ever? Colour me aroused