Which country has 2nd largest social welfare system in the world?

Surely not the US of 'F*ck the Poor' A? Actually, yes

Worstall @ the Weekend The general impression we've all got is that the US is a place where the poor are simply left to starve in the gutter, unlike in soft and cuddly Europe, where we do our best to help our fellow man.

That the political mantras shouted at us to keep us coughing up to pay for these welfare states might not be wholly and entirely true should not come as all that much of a surprise. So here's your cut-out-and-keep guide to what really goes on in the American welfare state.

The first and most obvious thing is that the US is indeed more unequal than most European countries. The Gini index (100 means one person has everything, 0 means income is entirely equally distributed) is higher. Not higher than Europe as a whole, of course, but higher than most of the individual countries within the continent. This means less than you might think: the Gini for most individual US states is also higher than most EU countries, so it's not just that we're measuring more people and thus should expect more variance.

However, the Gini for market income, what people earn under their own efforts (or manage to steal through being bankers etc), isn't markedly higher. It's that the tax and benefit system has less effect – leaving the final result more unequal than over here.

This leads many to think that the US poor are therefore worse off than the European poor. If not having as much as the other people in your society makes you worse off, then this is true. But if we're talking about an absolute standard of living, this isn't quite so. 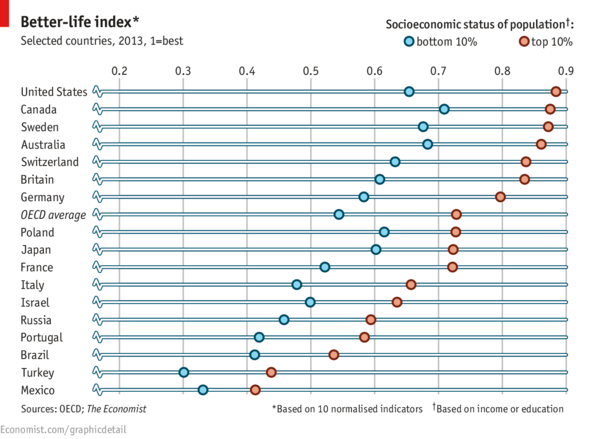 If we use Purchasing Power Parity (PPP, adjusting for the way in which things differ in price in different places, so we can look at the real value of incomes) and then look at the after-tax and benefit incomes of the poor, we can see this.

One such study, conducted a decade ago, for EPI’s State of Working America Report, measured the incomes of the poorest 10 per cent of the US using such methods, and compared them to US median incomes. The researchers also looked at the bottom 10 per cent incomes in places like Sweden and Denmark, the UK, and then, using the same adjustments, compared them again to US median income.

So as far as possible, this is a measure of what those poor can buy, after all the help they get in benefits and so on. Those 10 per cent poorest all had incomes around the 35 per cent to 38 per cent of US median income. So, while the US is more unequal (the same study showed that the richest 10 per cent in the US had 220 per cent of median US income to play with, top 10 per cent of Swedes 110 per cent for example), it isn't that the actual standard of living in the US is worse for the poor.

Are the US poor worse off than Europe's?

We've all also heard that poverty levels in the US are quite horrendous by European standards. There's the chilling stat that near 20 per cent of American children live in poverty, an appalling rate for a modern nation (after all, it's hardly the fault of the kiddies, is it?).

But this isn't quite so as the US measures poverty differently to everyone else. We all say that if, after benefits, you've got less than 60 per cent of median income, then you're poor. We get a bit fancier with adjusting for household size – after housing costs and so on – but that is the general system. The US, instead, has a so-called “absolute” poverty standard. Weirdly, this amounts to three times the basic food budget for a family in the early 1960s upgraded for inflation since then.

The major difference between the two ideas is that wages – generally at least if not in the past few years – rise faster than inflation. So the American measurement should gradually see poverty disappear; relating it to median wages means that we're really measuring inequality.

However, that's not really the problem with the US measurement. The main issue is that the US doesn't include most of the things it does to alleviate poverty in its measurement of poverty: and we do. So, the EITC (our working tax credits), Section 8 vouchers (housing benefit), Medicaid and SNAP (food stamps, which in reality work very like child benefit, they're very much more generous to those with children) don't get counted in measurements of US poverty.

I'd hate to think what the UK poverty numbers would look like if we measured them before the things we do to alleviate poverty, but that's how the US system works. It's a measure of who needs help, not the state people are in after whatever help is given. By one estimate, the US child poverty rate (this is from Census) is, after alleviation efforts, more like two or three per cent. But that is still by that absolute standard, not the relative one we use.

Next page: What's that? The US is progressive on tax?
Page: