Which country has 2nd largest social welfare system in the world?

Surely not the US of 'F*ck the Poor' A? Actually, yes

What's that? The US is progressive on tax?

The final basic background fact is that the US tax system is much more progressive than all European ones. Yes, I know, that should start some head-scratching. The Swedes tax high earners out the arse, France has a 75 per cent top income tax... whaddaya mean a place with a top income tax rate of 40 per cent has a system that is more progressive?

But progressiveness isn't measured quite that way. Rather, we look at how steeply the percentage of income taken in tax rises as income rises. The greater the gap between that percentage charged to high income earners as against low income earners, the more progressive the system is: even if the actual rate charged to the rich bastards is lower. And on that basis, the US does indeed have a more progressive tax system than almost all of Europe.

The reason is that the Federal tax system relies almost exclusively upon income taxes. And yes, obviously, the rich pay more here than the poor, even if not a larger enough amount, to many minds. What the Federal system doesn't have is high sin taxes (these weigh much more on the poor as they spend a higher portion of their income on tabs 'n' booze) nor, crucially, a VAT.

Yes, when we add in the State and local tax systems, there's often a sales tax in there and they are generally regressive, making the total US tax system less progressive than the Federal one alone. But the system as a whole is still markedly more progressive than what we've got over here.

The system is also markedly smaller, taking a significantly lower portion of GDP (about 10 per cent of all GDP less in fact) and thus redistributing less. So the overall tax and benefit system in the US is less progressive, but the tax system is more progressive.

And then we come to this most recent report that surprised even me. As the OECD tells us here the US has the second largest welfare system in the world. Obviously, fuck-off big rich nations will spend a lot on welfare, even if it's only a small proportion of the economy: but that's not what they mean. Rather, they mean that as a percentage of total GDP, the US spends the second largest amount on social welfare. 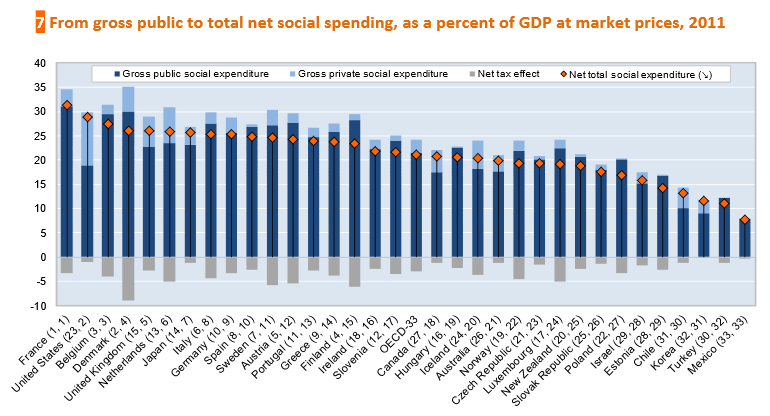 That's why commune income taxes are 25-30 per cent of incomes and the national income tax rate starts at 3.76 per cent and tops out at 15 per cent). This is total social welfare expenditure. This doesn't mean that you're turning up with a wad of cash to have your jugular sewn back up then that cash is social welfare: but private health insurance is.

And it probably should be that way as well. We generally think that social welfare is a superior good, something that we're willing to spend more of our income on as we get richer. This is a similar idea to Maslow's Pyramid or Hierarchy of Needs. Once we've got the food and the shelter sorted, we start to think about health care, unemployment insurance and so on as being increasingly valuable. So, we'd sorta expect a richer society to spend more on such things.

But it's the one final, and to me very interesting, thing that boosts the US up the listings. That's the “net tax effect”. As an example, someone who spends their child benefit on a packet of ciggies (and who wouldn't need a couple after looking after a squalling brat all day?) ends up paying 80 per cent of that benefit back to government on that pack of fags. There are many more examples, but the US claws back less of the poor's money in this manner than anyone other than South Korea. For not only are the rich lightly taxed there (although most progressively), so are the poor: and again it's the absence of a VAT and heavy sin taxes that is responsible for most of it.

As that chart shows, the net effect of all of this is that the US really does spend more on social welfare than anyone other than France. It's just it has a different mix of public and private (but still communal) provision and they tax the poor less while doing so. And that end result is really surprising: it certainly is to me and I'm supposed to already know most of this. Who really would have thought that the US spends more on social welfare (30 per cent of GDP) than Sweden (25 per cent) or Norway (20 per cent)?

Or, indeed, that the UK (26 per cent) spends more than either Sweden or Norway and only a little less than Denmark?

All of the above is most unlike my normal neoliberal ranting, but let me get just one dig in. Imagine, as most of those on the left seem to say they want, you desired a substantial social welfare system funded by a truly progressive taxation system? Turns out the working model is the United States. Who knew? ®