GERONTIC 'Ghost ship' prowled the undersea cables of the 1940s

I say HURL: Boffins find lost US Navy vessel that pulled C&W out of the Pacific

A "ghost ship" which helped develop the world's network of undersea cables - and worked for the former British Cable & Wireless firm, nowadays renowned as partner to the Five-Eyes spook alliance under the secret codename GERONTIC - has been discovered deep beneath the waves near Hawaii.

The ship in question is the Dickenson, also known as USS Kailua. Boffins from the University of Hawaii Undersea Research Lab (HURL) and the US National Oceanic and Atmospheric Administration (NOAA) found the ship 2,000 feet down, 20 miles off the coast of Oahu, with the aid of a robot sub. 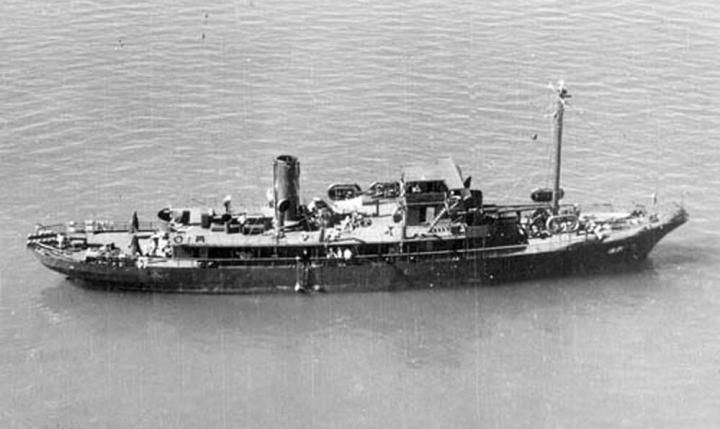 It used to be all copper round here.

The Kailua, as she then was, had been sunk while acting as a torpedo target for the US Navy in 1946. The exact location of the test not having been recorded, the resting place of the wreck had been unknown until the HURL and NOAA boffins happened upon it this year.

Before the war, the Dickenson had been a cable ship in the Pacific, carrying out network repairs and delivering supplies and personnel to island cable stations. The ship had been chartered by Britain's Cable & Wireless to evacuate company personnel from the company's base at Fanning Island ahead of the Japanese advance in 1941. Another regular pre-War port of call for the Dickenson was Midway Island, a major undersea cable hub which was later the backdrop to the great carrier battle of the same name, in which the tide of the Pacific struggle was turned.

"It is always a thrill when you are closing in on a large sonar target with the Pisces submersible and you don't know what big piece of history is going to come looming out of the dark," says Terry Kerby, HURL submersible pilot. "One of our first views of the USS Kailua was the classic helms wheel on the fantail. The ship was surprisingly intact for a vessel that was sunk with a torpedo. The upper deck structures from the bow to the stern were well-preserved and showed no sign of torpedo damage."

So untouched and Mary Celeste-esque did the wreck seem, that the investigating scientists dubbed it a "ghost ship" - at least according to this Hawaii uni press release.

Just what involvement Cable & Wireless may have had with the British intelligence community back in the 1940s is not widely known, but it was probably at least as substantial as it is today. The company - nowadays part of Vodafone Cable - earns millions annually by tapping into its own and sometimes other firms' cables on behalf of British spy agency GCHQ. At GCHQ and more widely among the "Five Eyes" Anglophone spook alliance, the former C&W operations are referred to under the two-levels-above-Top-Secret codename GERONTIC (which was among the information removed from the American NSA by rogue sysadmin Edward Snowden and exclusively revealed by the Register earlier this year).

So it would seem that the Dickenson/Kailua was a ghost ship - or at any rate, a somewhat shadowy one - at times even when she was afloat, as well as today lying on the sea bed.

"From her interisland service to her role in Pacific communications and then World War II, Dickenson today is like a museum exhibit resting in the darkness, reminding us of these specific elements of Pacific history," says Hans Van Tilburg of the NOAA. ®