CEO speaks out ahead of showdown 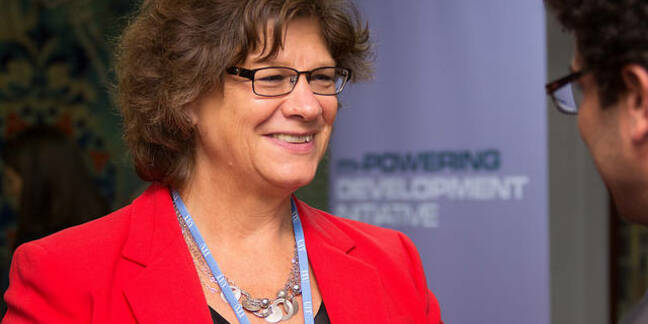 Internet Society CEO Kathy Brown has rebuffed efforts to get her onside a controversial new body that plans to steer the internet.

Despite a series of private meetings with the ICANN-backed NetMundial Initiative (NMI), Brown noted in a blog post on Monday: "It is fair to say that issues, including the need for the NMI Council, its selection, financial transparency and long-term objectives and goals, remain."

Last month, ISoc – which among various roles dishes out grants and supports the web's crucial IETF standards group – refused to take up the offer of a "permanent seat" on the initiative's ruling council, noting that the program was "inconsistent with [our] longstanding principles."

Its stance sparked a series of rejections from other groups, including parts of civil society, the International Chamber of Commerce (ICC), and the Internet Architecture Board (IAB), which also oversees the IETF. The Internet Governance Forum (IGF) has turned down the offer of its permanent seat, too.

Brown notes the others' concerns: "Other important stakeholders in the Internet Governance dialogue have raised significant concerns about the NMI. The IAB has concluded that 'no coordination council is needed now.' And, there seems to be a growing consensus that the proposed mapping and other crowdsourcing efforts, should they go forward, should be managed through a bottom-up process."

The initiative was spearheaded by ICANN CEO Fadi Chehade following the "NetMundial" internet governance conference in Brazil earlier this year. After a series of missteps, last month Chehade, along with representatives of the World Economic Forum (WEF) and Brazilian internet organization CGI.br, formally launched the NetMundial Initiative, purportedly to turn the principles agreed to at the conference into something more tangible.

The launch was met with immediate suspicion. Although the organizers pitched the initiative as an open-source platform that would bring together people trying to find solutions to internet governance issues, the only thing that was announced was a 25-member "coordination council" on which the three organizers had awarded themselves permanent seats. A further two permanent seats were given to key internet organizations, and 20 seats would be split across global stakeholders, with the individuals members chosen by the three organizers.

There was no platform, mission statement or stated open source approach. Likewise, there were no supporters, application developers, issue reports or anything that you would associate with the launch of a platform designed to bring people together.

The permanent seats were immediately viewed as both an attempt to control the program as well as a ploy to get internet organizations on board. But it backfired spectacularly when the Internet Society not only refused to play ball but put out a public statement condemning the behind-the-scenes effort.

Rather than building the structure they claim to be the whole point of the initiative, or getting the internet community on board, the organizers appear to have expended all their resources getting the United States and Brazilian governments behind the program.

With the increasing number of rejections from the actual internet community, the NMI's organizers appear to have entered a state of denial, continuing to run their own meetings, refusing to delay creation of the council, and issuing updates that only serve to highlight the top-down nature of the program.

Brown notes in her post that things will finally come to a head next Wednesday – December 17 – when the chairs of ICANN, ISOC, the IETF and the IAB will all meet. "Fadi and I will attend," she notes. "We see this as an opportunity to explore our different views on NMI and to improve the coordination between our respective organizations."

As has happened multiple times during Chehade's tenure at ICANN, we can expect the meeting to produce an effusive, praiseful and hopelessly optimistic U-turn.

The coordination council is almost certain to be dropped, at least for now. The big question will be whether ICANN walks away from the entire project once it realizes it will not be able to control its direction. ®