And Apple is their number one target 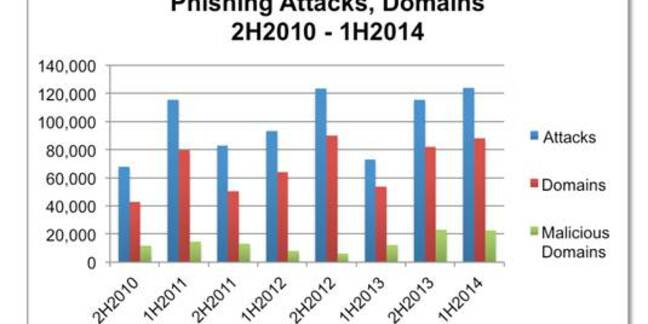 Chinese internet users are behind 85 per cent of fake websites, according to a semi-annual report [PDF] from the Anti-Phishing Working Group (APWG).

Of the 22,679 malicious domain registrations that the group reviewed, over 19,000 were registered to servers based in China. This is in addition to nearly 60,000 websites that were hacked in the first half of 2014 and then used to acquire people's details and credit card information while pretending to offer real goods or services.

Chinese registrars were also the worst offenders, with nine of the top ten companies with the highest percentages of phished domains based in China.

Dot-com domains are the most popular for phishing sites, being used in 51 per cent of cases, but when it comes down to the percentage of phished domains against the number of domains under that registry, the clear winner is the Central African Republic's dot-cf, with more than 1,200 phished domain out of a total of 40,000 (followed by Mali's dot-ml, Palau's dot-pw and Gabon's dot-ga).

Despite concerted efforts to crack down on fake websites, little improvement was made on the last report in terms of uptime (although it is significantly lower than when the group first started its work back in 2010). The average uptime of a phishing site was 32 hours, whereas the median was just under 9 hours.

As for the phishers' targets: Apple headed the list for the first time being used in 18 per cent of all attacks, beating out perennial favorite PayPal with just 14 per cent.

Despite some fears, the introduction of hundreds of new generic top-level domains has not led to a noticeable increase in phishing, according to the report. The authors posit that this may because of the higher average price of new gTLDs, although they expect the new of new gTLD phished domains to increase as adoption grows and websites are compromised.

Around 20 per cent of phishing attacks are achieved through hacking of vulnerable shared hosting providers.

For much more information, check out the report itself [PDF]. ®