G.fast is HERE: Sckipio slurps funding to cook up SPAWN of VDSL tech

Having sold his company Coppergate to Sigma Designs in 2009 for around $190m, Sckipio boss David (Dudi) Baum has got the band together to build a fixed broadband chip to take advantage of the 1Gbps-over-copper VDSL successor G.fast, which was ratified as an ITU standard this week.

Sckipio has raised $17m in a series of second-round funding moves led by Pitango Venture Capital, to be combined with follow-on investment from the original Series A investors: Gemini Israel Ventures, Genesis Partners, Amiti Ventures and Aviv Ventures.

The $17m follows an initial investment of $10m.

The company is named after Scipio Africanus, the Roman general who defended Rome against Hannibal in the battle of Zama. Sckipio's marketing man Michael Weissman explained that the company sees its role as defending the telephone companies against the cable businesses.

The company has designed a pair of chips for G.fast. The DP3000 is designed for building into distribution points and will talk to multiple CP1000 chips which will go into modems in customers’ homes. Most existing fibre broadband setups take fibre to the cabinet and then twisted-pair copper phone lines into the customers’ homes.

Telecoms loves an acronym, so ITU specifications G.9700 and G.9701 are "Fast Access to Subscriber Terminals", commonly known as G.fast. 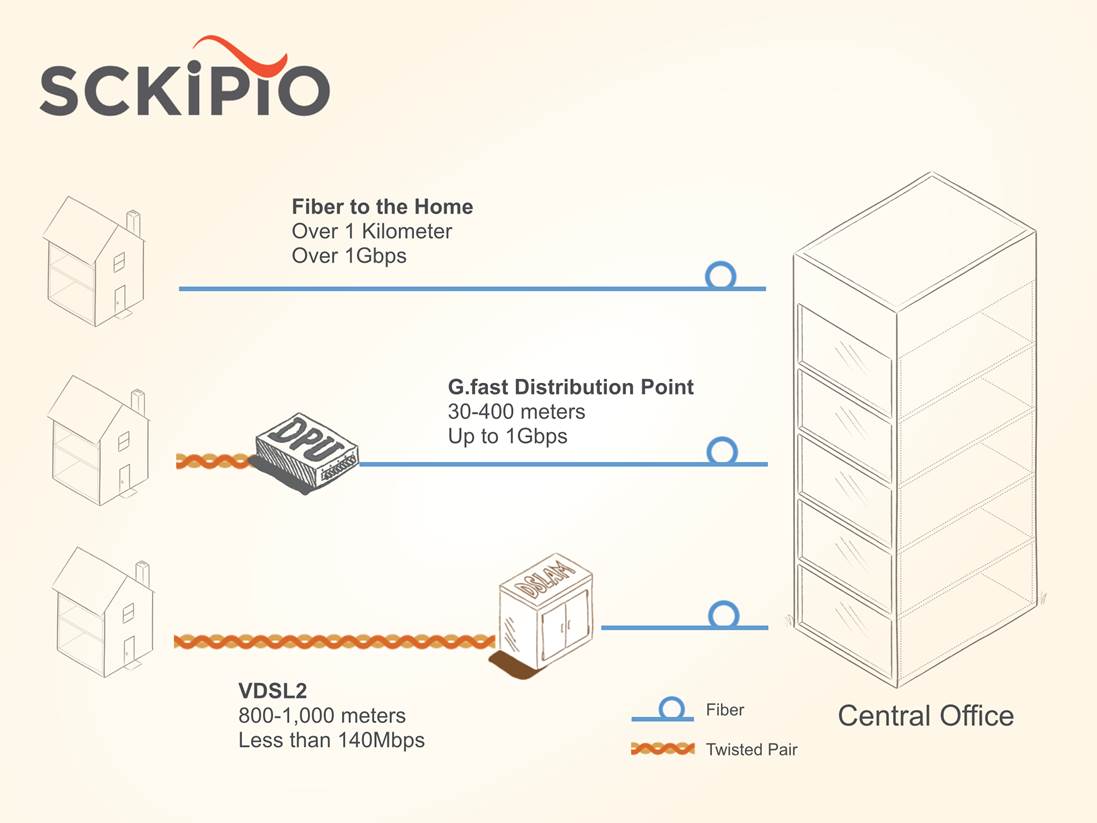 Fibre can be run straight to the distribution point without a cabinet but that's really for situations where nothing has been deployed before. G.fast means the really expensive bit of taking broadband into new subscribers' homes – digging up front gardens – can be sidestepped until the need for fibre speeds in the home becomes overwhelming.

Ultimately, fibre is always going to be faster. Yet Sckipio claims costs of $4,000 per home to install it are typical, with point-to-SL technology still outselling FTTH (fibre-to-the-home) by six-to-one currently. Sckipio also claims that the evolving G.fast standard will mean that the day when fibre is necessary might be a long, long way off.

Performance depends on the distance from the distribution point to the customer's home. At 50-100m, 1Gbps is achievable, and extensive testing shows that at 300m it's still a good 500Mbps, and at 400m it drops to 100Mbps.

Beyond moving the end of the fibre closer to the customer, G.fast has a number of other improvements over xDSL; namely, there is a massive jump in bandwidth. With traditional analogue telephone speech the lines were designed for 4kHz of bandwidth; xDSL uses anywhere from 17MHz to 30MHz of spectrum over G.fast (specified to 106MHz) and that’s what the initial Sckipio chips will do.

However, 212MHz is already being contemplated for future versions which could extend the life of copper even further.

In a cabinet you have access to mains power but a distribution point does not, meaning it's powered over the lines from the modem – so reducing the power consumption becomes very important. When in the TDD scheme, there is no data being transferred and the power consumption is minimal. Power does, however, have to be balanced.

Next page: Feel the noise (and silence)
Page:
Corrections Send us news
8 Comments