Next job, a way to strap it to sharks 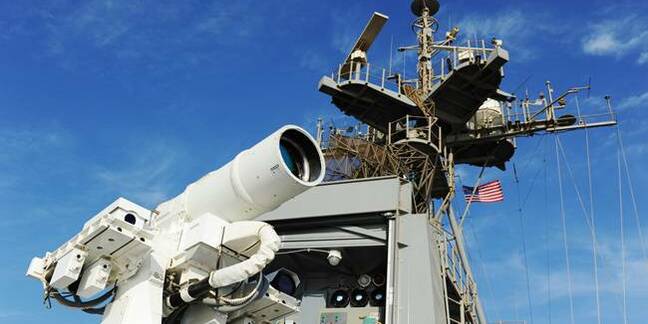 Pic and video After years of promises the US Navy has deployed its first operational laser cannon, which has been built into the USS Ponce and sent into a combat zone.

The 30-kilowatt laser weapon system (LaWS) has been mounted high up on Ponce's superstructure, and a flashy video released by the Navy shows it blowing up parts of boats and a drone. The operator uses a controller familiar to any console gamer to scan for targets using a high-powered telescope, aim, and fire the weapon.

The LaWS cannon took $40m to develop and deploy, has a range of about a mile, and requires its own power-generating unit, but the Navy is cock-a-hoop about their latest weapon.

"We ran this particular weapon, a prototype, through some extremely tough paces, and it locked on and destroyed the targets we designated with near-instantaneous lethality."

While that's true, the video shows certain limitations in the LaWS. For a start all the targets it blew up were traveling in straight lines and moving relatively slowly, and it's unlikely such cooperative wartime targets would be available. Nevertheless the Navy could be hiding some of LaWS' lights under a bushel, and the weapon does have one huge advantage – it's cheap to use.

"At less than a dollar per shot, there's no question about the value LaWS provides," said Klunder. "With affordability a serious concern for our defense budgets, this will more effectively manage resources to ensure our Sailors and Marines are never in a fair fight."

The LaWS also has the advantage of relying solely on electricity, so there's no danger of running out of ammo at a crucial moment. The point-defense system it's supposed to eventually replace – the 20mm chain-gun-armed Phalanx system – uses a lot of ammo and needs frequent reloading.

But the 30-kilowatt LaWS is a long way from replacing Phalanx, for the moment, although it does share the older system's targeting radar. For the moment the LaWS will be used for close-in targets, although under the terms of the Geneva Convention it can't be used against humans directly.

The Navy plans to develop future generations of LaWS weapons system going up to 150 kilowatts and beyond. Throw in a fast targeting system, and put it on a modern warship with a good-sized power generator rather than on a 48-year-old warship, and you may have something really useful. ®