Military blunders and making records with The Beatles, The Who and more

Page File El Reg bookworm Mark Diston looks at the latest from literature's non-fiction canon: US general Daniel Bolger endeavours to make sense of the senseless regarding America's operations in the Middle East and Glyn Johns, record producer for the stars, tells of his many, many, rock and roll years.

Why We Lost: A General's Inside Account of the Iraq and Afghanistan Wars

Daniel Bolger is a US Army general who, to quote his own words, “lost the War on Terrorism”. This book is more of an overall history of the wars, rather than a dissection of the tactics used. When war goes wrong, Bolger states, “the military point fingers at the civilian officials... for mucking up the war”. He isn't reduced to this blame game himself, instead insisting: “Our primary failing in the war involved generalship”.

Bolger takes us back to the first Gulf War: Operation Desert Storm took place to expel Saddam’s forces from Kuwait in 1991. Bolger describes the formative years of Osama Bin Laden, including how Bin Laden became radicalised and fought against the Russians in Afghanistan in the 1980s. Offended at the presence of Desert Storm infidels in the land of the holy Muslim shrines of Mecca and Medina, a fatwa was pronounced against the US, leading to increasing terrorist activity during the 1990s.

Bolger states that the US military “learned to expect the intelligence community to predict disaster 10 out of every 3 times”. A state of affairs that ridicules the hysteria in the secret services which evidently failed to predict the 11 September 2001 attack on the US and its response with the invasion of Afghanistan. 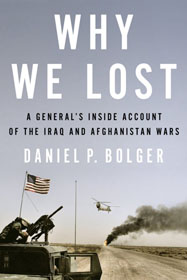 Why We Lost tells of the error of Saddam’s forces in trying to fight a conventional war against overwhelming odds. Bolger explains that the traditional Arabic method of waging war – as described by such luminaries as T.E. Lawrence – involves raids and ambushes and how, unlike the locals, “the Americans lacked faith and staying power”.

The invasion of Afghanistan begins well, as opposition forces melt away, but Bolger reminds us of the fierce resistance shown at the Qali-I-Jangi prisoner uprising: “Inside that crumbling fortress lurked the shape of things to come”.

There was also a problem with the status of prisoners, who were not accorded the normal rights of prisoners of war. Bolger believes in a rare criticism of the politicos: “Leaving the detention situation so loosely defined would come back to bite them”.

The initial success of the Afghan invasion leads the US leaders to contemplate an ill-thought-out war against Iraq. The strategy, he says, was summarised as: “The key thing was to blow Saddam off the map. The rest might well take care of itself.”

The Iraq invasion is described in detail and is brought to life superbly due to Bolger’s first hand knowledge. The disasters of de-Ba'athification and the Abu Ghraib prisoner scandal ratchet up the insurgency… the rest is history.

This book would have been better titled: “How We Lost”. As a history of the wars, it is a wide-angled overview, as you would expect from a serving general. There are no great secrets contained in this book that we haven’t heard before: “The mission remained obscure because the enemy remained ill defined”.

Bolger is ridiculously polite to his bungling political masters, so much so that one could think he is after a seat in Congress. As for the military, he shows respect for the institution, though the roll call of West Point football jocks may give us a clue as to why: “The military offered advice hardly worth hearing”.

As a history this is a fascinating work. Daniel Bolger does not appear outside the introduction to his own book, but his familiarity with military operations and the splendid overview he has, make this the best book that I have read about the theatre of operations during the Bush wars. Indeed, it's not widely available in the UK yet, apart from Amazon, but worth seeking out all the same.

Perhaps unsurprisingly, Bolger quotes long-dead general and revered military strategist Carl von Clausewitz on multiple occasions, but his failure to bring the politicians to task seems too much like the continuation of diplomacy by other means. Bolger’s final verdict is an understatement: “Our foes waited us out”.