Military blunders and making records with The Beatles, The Who and more

Sound Man: A Life Recording Hits with The Rolling Stones, The Who, Led Zeppelin, The Eagles, Eric Clapton, The Faces... 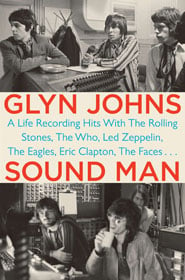 Glyn Johns is a veteran sound engineer and record producer and Sound Man is the story of his working and creative life. Born in 1942 and raised in Surrey, Johns’ first musical experience was as a choirboy, but he recalls being more inspired by his uncle’s renditions of Django Reinhardt and American folk songs.

Johns describes his first attempts at guitar, before picking up the tea chest bass in a skiffle band. He meets Jimmy Page and Ian Stewart during his teenage years. Page would later form Led Zeppelin and keyboard player Stewart is credited as co-founding The Rolling Stones.

Out of the blue, Johns’ sister Sue enquired if he had ever considered working in a recording studio as a friend of a friend knew of an opening at IBC studios: “Needless to say, it had never entered my head to work in the music business”. Glyn got the gig and it was a great introduction to the industry, as IBC at the time was “the finest independent recording studio in Europe”, he writes.

My Generation by The Who

Johns explains how record producers in the late 1950’s were what we would call “impresarios” – glorified managers who booked the songwriters, acts and session musicians. He describes how by the early 1960s, UK acts were eager to emulate the sounds coming from the US labels such as Tamla Motown.

Glyn Johns started inviting friends to IBC during studio downtime on Sundays and honing his skills until he was able to become Britain’s first freelance sound engineer. For those who might consider Glyn Johns to have a somewhat lightweight sound, he name-checks three songs he engineered for Shel Talmy in the early sixties: My Generation, You Really Got Me and All Day and All of the Night, as well as the eponymous first Led Zeppelin album – nuff said.

Sound Man goes on to describe how Johns nearly turned down his first job with Andrew Loog Oldham, a fruitful relationship which led to him working with The Rolling Stones.

Don't let me Down – The Beatles

Glyn Johns' most well known work is probably on Let It Be and Abbey Road. The normally diplomatic Johns, who was behind the recording effort on Let It Be describing the Phil Spector mix of the album as “the most syrupy load of bullshit I had ever heard”.

He remembers the music business in the 1960s as being “a bit like the Wild West or a video game, ever day was spent zig-zagging and ducking”.

As the 1970s arrived, Johns found a niche producing West Coast rock acts. Now I don’t know about you, but the house band in my personal hell is the Eagles. But Glyn is a traditional lad at heart; don’t mention the words “punk” or “synthesiser” around him. The rest of his tale is a rather depressing curtain call of well-played drudgery.

Flanked by McCartney and Jagger, the sound man of the Sixties, Seventies and beyond

Nevertheless, Glyn Johns is an entertaining and thoughtful narrator, so even if you consider the likes of Leon Redbone, Rita Coolidge and Gram Parsons to be the victory of boredom over ideas, reading about them is nowhere near as depressing as having to listen to them.

Glyn Johns comes over as a fascinating character who seemed to be in the right place at the right time. The highlights of Sound Man nearly all take place in the Sixties, so it is ideally a book for the (nearly) ancient, the hirsute, the ex-hirsute and those with a taste in music which doesn’t advance too far after 1970. ®