Downrange We here on the El Reg gun sensation desk considered getting Gaz to make an unimportant part or accessory for his Lee Enfield out of 3D printed plastic, or in some other fashion involve a computer, which would probably have led to excited writeups in the world's media about Brit GUN NUT 3D PRINTS working SNIPER RIFLE in SHED, defying nation's gun laws etc etc. But then we decided to go to the pub instead. -Ed

It all started when I went round to a friend's dad's gunshop and saw a box of what looked like water-damaged rusty old junk tucked away in a corner. Except one of those rusty lumps of steel was the receiver of a Second World War Lee Enfield No. 4 service rifle. 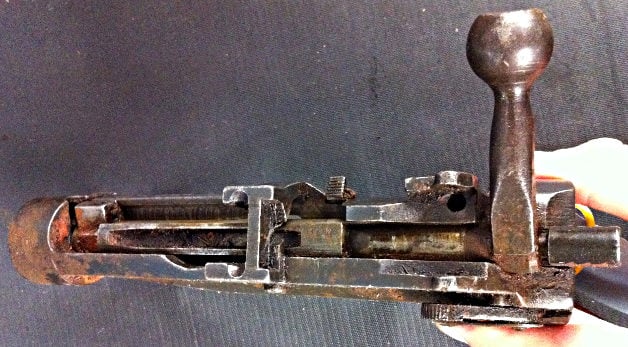 Rusty old lump: If you know what you're looking at it's salvageable

So I did what any sensible man would and asked him, “Can I have this?” Happily for me he said yes, and so I became the proud owner of a rusty old receiver, bolt, trigger mechanism and trigger guard. Happily for me the bolt number matched the receiver, meaning - in theory, at least - this rifle would be capable of shooting straight once assembled.

At this stage I should point out that I knew – and indeed, still know – very little about “building” rifles in the way that gunsmiths do. Strictly speaking, the project I took on was more about “assembling” a rifle using off-the-shelf parts rather than building one truly from scratch.

But you don't quibble about linguistic technicalities when the result is your very own .303” No.4 Mk.I, which was the main small arm issued to the British Army during the latter half of World War Two, gradually replacing the famous .303” SMLE rifle of WWI fame. 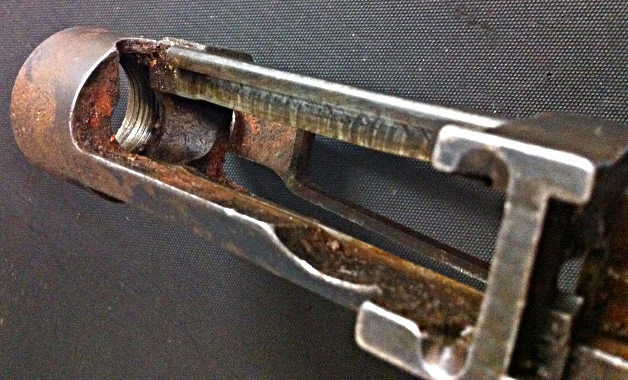 Orange: That rust around the front of the receiver was a cause for concern at first - but it hadn't gone too deep

The No.4 stayed in production until 1955, being superseded by the L1A1 Self Loading Rifle in frontline British military service. Nevertheless, the venerable No.4 continued with various second- and third-line units, and later the cadet forces, until the 1980s. Its smaller brother, the .22” No.8 (*), is still in cadet service – having been introduced in 1947 – to this day, although the Ministry of Defence is actively looking for a replacement as stocks of No.8s to cannibalise for spares wear thin.

Next page: Cleaning off the rust
Page: