Finding a barrel and getting it proofed

This was the tricky part. Yours truly, being a student at the time, wasn't exactly blessed with cash. Early on I decided the cost of a new Lothar Walther barrel would simply be more than the complete rifle was worth, bearing in mind the cosmetic water damage. That meant the only option was a secondhand take-off barrel scavenged from someone else.

So I walked into the gunsmiths Fultons of Bisley and asked what spare secondhand No.4 barrels they had available. Luckily, at the time they had half a dozen in stock and I soon picked out the one with the best (relatively!) throat and crown. Off my receiver** went to have the barrel fitted by a professional gunsmith - no way would I trust myself doing that, given that I have no practical experience of barrelling rifles at all - and proofed by the London Proof House.

Proof is the process by which a firearm is independently tested to show it is safe to use and won't blow up in the owner's face. The process is laid down by laws dating back to the 19th century, before the advent of modern non-destructive testing. A firearm must pass proof before it may be sold or otherwise transferred from one person to another.

Your rifle (or shotgun) is placed by the Proof House into a room with very thick walls. A string is tied to the trigger. The proof house staff load it with a round designed to develop 25 per cent more pressure than a normal cartridge, retreat around the corner and pull the string. For a .303" rifle developing a nominal 49,000 pounds per square inch (psi), the proof round thus generates a pressure inside the breech of 61,250 psi.

If your rifle, or, say, your £100,000 handmade custom Purdey shotgun, survives this treatment without exploding or cracking, it's passed as fit to use. A number of rifles and shotguns fail proof - that is to say, they are destroyed during the process.

After a month I got my rifle back from the Proof House. Happily for me, they hadn't blown it up. The next stage was to fit the woodwork to it.

"Furniture", in the shooting world, refers to the wooden bits of a rifle that you hold onto. The No.4 rifle was fully stocked, meaning the woodwork stretches all the way to the foresight at the front of the rifle. This helped stop soldiers burning themselves on the hot barrel after sustained rapid fire.

Now, the real question here was, where would I get a decent set of woodwork from? Here I cocked up. Instead of doing the sensible thing and going to a gunshop with a knowledgeable dealer who would sell me something fit for use, I went on eBay and bought a "new, unissued" set of No.4 woodwork, which included a butt, a forend (the long piece), and rear and forward handguards. 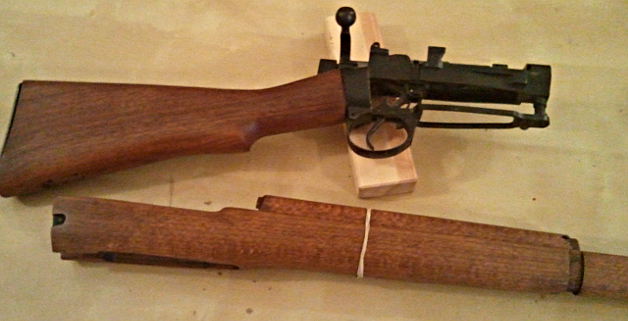 Woodwork: And here's the first set of furniture I bought. It was unissued - for a good reason

All of the wood was unfitted, meaning I'd have to rapidly refresh my school woodwork skills (limited at the time to using a hacksaw and a file) to assemble the rifle. As all wood from the wartime factories was issued slightly oversize to allow hand fitting by unit armourers, yours truly would have to learn how to do it all on the job.

It took me about a week of gentle fettling with a fine file, sandpaper, linseed oil and wet'n'dry paper to get the butt socket fitted for that photo above. Evidently the boss of the butt was slightly too long to achieve a flush fit into the receiver socket. A few quick strokes with the file fixed a problem that was driving me to despair!

It got worse when I tried to fit the forend, using Peter Laider's excellent article on fitting the forend (acccessible via the milsurps.com forum, here) as a guide. I simply couldn't get this as-new, unissued, forend to bed properly - no matter what I did with sandpaper and feeler gauges, the barrel was always hard over to one side of the forend rather than resting centrally in the barrel channel.

Next page: Starting over - and finishing off
Page: