Starting over - and finishing off

Eventually I took the forend off the rifle and showed it to my girlfriend. "It's warped," she said. "Bugger," I said. No wonder the damn thing had never been fitted in 70 years!

Happily, we figured this out just before the Trafalgar Meeting at Bisley Camp in Surrey. The Trafalgar is a large shooting event for historic rifles which includes an arms fair by dealers specialising in historic firearms. So yours truly toddled along, clutching a fistful of cash and a hopeful disposition.

There I was very lucky to meet Enfield specialist Terry Abrams, who sold me a new forend and handguards - significantly cheaper than the eBay seller as well! I also invested in a full set of foresight blades for properly zeroing the rifle.

Fitting the new forend was comparatively easy once I had one that fitted. The key measure of getting it right, as per the service bedding instructions, is that the barrel should bear down centrally onto the forend and take about 3lbs - 5lbs of force to lift it up. Mine managed this without too much fettling, although it still had a tendency to sit off to one side.

Unfortunately things went a bit wrong on the first range test. To wit, fired cartridge cases were displaying a very strange imprint around the shoulder, almost as if the case itself was touching the rifling in the barrel.

Happily for me, Fultons agreed to replace the barrel for the cost of having it reproofed. That went without a hitch and the replacement - another takeoff barrel, this time from a Fazakerley No.4 Mk.2 - works perfectly.

Here it is: the Lee Enfield No.4 wot I built for myself: 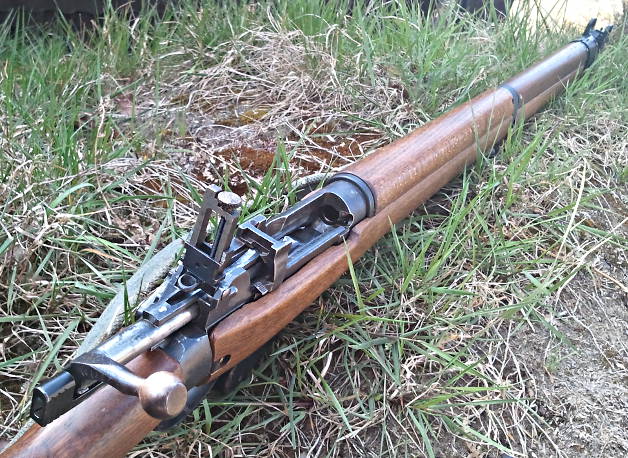 Ta daa! One complete and functional No.4 Mk.I, as put together by your correspondent 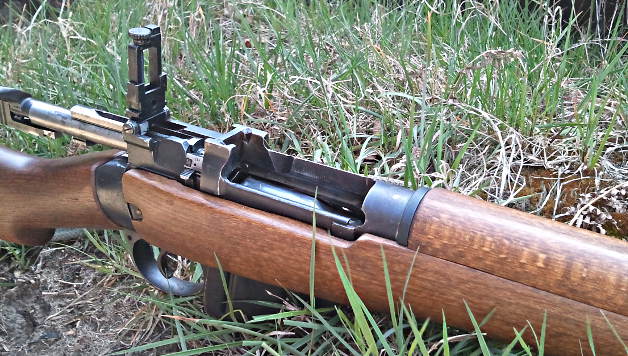 Receiver area: The original blueing survived very well and is nicely offset by the beech furniture

My completed rifle is capable of grouping 6" at 200yds, or three minutes of angle for the technically-minded. Not too bad for something fettled together by a technology journalist, eh? I've since shot it competitively - particularly at the NRA Falling Plates match held in summer - and it hasn't let me down.

Sadly there isn't space to go into the full detail of the build - getting the magazine to feed was a long process of sitting around with drill rounds and a pair of pliers - or fitting the rearsight, when your correspondent took two hours to realise that the end of the axis pin was very slightly peened and so wouldn't slide home far enough to get the retaining pin in the far end. But it was fun - and gave me a solid insight into what armourers had to do without the luxury of indoor climate-controlled facilities during the long march across Europe in the 1940s. ®

* Your correspondent knows that the “CR324” number stamped into the butt socket of the No.8 is quite often mistaken for the serial number by owners (and apparently military quartermasters too, according to walking Enfield encyclopaedia Captain Peter Laidler, a British army armourer who serviced Lee Enfields - and the rest! - in Malaya, who is now a technical consultant to the Small Arms School Corps museum at Warminster) who are not well versed in the mysterious ways of Enfields and the British military stores system.

Your correspondent also wonders how many entries there are for “.22 bolt action rifle” with the serial number CR324 on the National Firearms Licensing Management System. Without naming names, we can confidently state that more than one such entry exists. Perhaps a police firearms enquiry officer would like to look it up and let us know?

** Knowledgeable readers will be wondering how someone who isn't an RFD had possession of the receiver. I didn't - but it helps to have an RFD as a personal friend!

A note on the headline: Lee Enfield .303 rifles, being bolt action and using full-fat rifle ammo, are certainly describable as sniper weapons in modern terms. Lee Enfield .303 variants were issued to snipers, fitted with telescopic sights and other enhancements, and the Lee Enfield continued in the sniper role for many years after being replaced as a standard battle rifle by the SLR/FAL.