Torrent site IsoHunt.to claims to have copied The Pirate Bay's database and has recreated a version of the site at oldpiratebay.org/.

Isohunt's operators claim they've “copied the base of the PirateBay in order to save it to the generations of users.” Here's the rest of their proclamation. 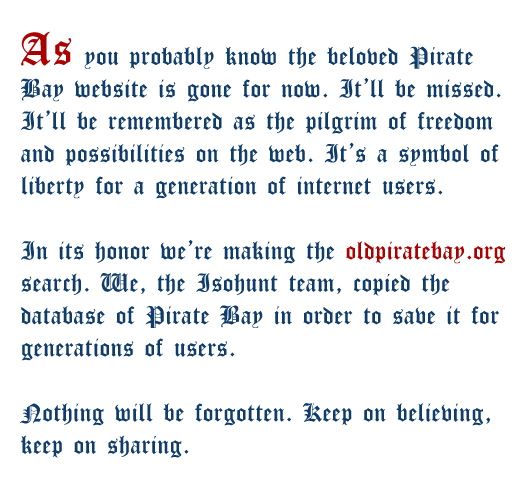 The Reg's attempts to test the revived site suggest it is indeed a working replica of The Pirate Bay. Searching for popular television shows produced working torrents. Some searches, such as “Simpsons Movie”, produced only links to smut. Which we didn't click on.

Many observers have opined that The Pirate Bay's demise would be temporary, and that the global game of whack-a-mole that's played out in recent years would be played out again after the recent Swedish raids. That theory has been proven correct and the game is on, once again. ®