Fedora 21: Linux fans will LOVE it - after the install woes

Purrs like a beauty once you get her running

Review As has become par for the course with Fedora, the latest – Fedora 21 – has arrived months behind schedule. To its credit, it's well worth the wait.

This release marks the start of the Fedora.next project. The big change is that Fedora 21 is available in three flavours: cloud, server, and workstation.

All three build on the same base, adding packages relevant to the use case. For this review I tested both the server and workstation, primarily the latter since that's the flavor targeted at desktop users.

While I did not test it, the cloud no doubt has appeal for those running large virtual server installations. It uses a modular kernel image that is about 25 per cent smaller than images required on physical hardware. The cloud flavor is available preconfigured for OpenStack, Amazon AMIs and Atomic images meant for Docker containers.

Given the base system shared by these new flavors, I hoped there might be a plain, base flavor - something akin to Debian's Minimal install, which would let you build a more customized desktop. But so far that's not something Fedora is doing. In fact, the Fedora project emphasizes that the base set of packages is "not intended for use on its own".

There are, of course, plenty of other Fedora spins, including a very nice one based on the MATE desktop. 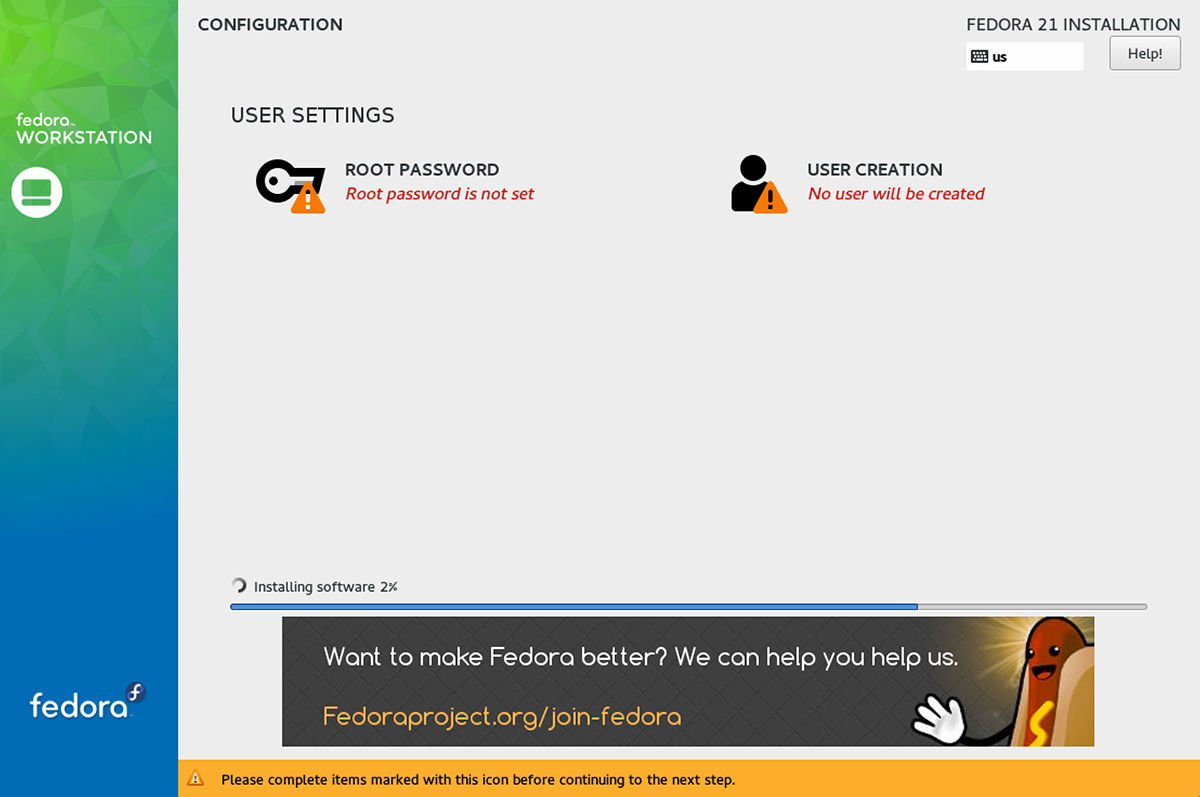 Clear? No. The Fedora 21 install

Fedora 21 Workstation installed without a hitch, though the installer was considerably less elegant than the Mint 17.1 installer I tested prior to the release of Fedora 21.

Fedora claims it has simplified the installer down to just "selecting the layout of your physical media, and then pressing install." That's true, but it's not terribly discoverable. Fedora elects for a series of buttons, rather than the animated walk-through you get with Mint or Ubuntu – or even OS X and Windows.

With Fedora's installer it isn't immediately clear what you need to do – or even that you need to do something – until you click each button and find out, which runs the "select your layout" and installs. It's not that bad; it's not like installing Arch, but it did leave me wondering “why?” Why not just go with the familiar, narrative-like sliding screen animation that, well, pretty much every other OS out there uses?

If the installation criticisms seem nitpicky, it might be because once you get past them there's not a lot wrong with Fedora 21.

Once you get workstation installed the first thing you'll see is GNOME 3.14, a huge leap forward from the last official Fedora release, which used GNOME 3.10. Since that time GNOME has added several new apps, reworked the default theme and improved its HiDPI screen support among other things.

GNOME continues to have one of the best looking interfaces on HiDPI screens and this release is no exception. This time around, GNOME has been polishing the smaller bits and fixing a few inconsistencies and bugs that plague the previous release. If you're coming all the way from GNOME 3.10, the HiDPI support in this release will be a welcome upgrade.

Next page: Give GNOME another go
Page: