Don't panic, US Navy has only deployed a ROBOT SHARK (but where are the lasers?)

GhostSwimmer is an underwater James Bond

Pics and video The US Navy has shown off the first images of its latest aqua-drone: a five-foot-long robot shark that's been swimming off the shores of Virginia. 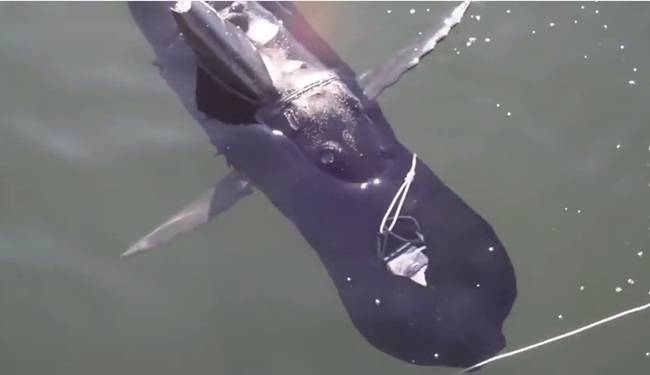 Dubbed GhostSwimmer, the 100lb machine (in Navy-speak, an AUV or autonomous underwater vehicle) is capable of swimming in water between 10 inches and 300-feet deep. It can be operated by a shipboard operator on a 500-foot tether cord, or programmed to operate independently for "extended periods" on battery life, rising to the surface to transmit data as needed.

The metal monster will be used for "surveillance, mine countermeasures, port security, and other defense and homeland security initiatives," according to the Navy, but there's no word on weaponizing GhostSwimmer. Lasers would be a popular strap-on, although of limited use underwater.

"GhostSwimmer will allow the Navy to have success during more types of missions while keeping divers and sailors safe," said Michael Rufo, director of Boston Engineering's Advanced Systems Group (ASG), which designed and built the robot.

GhostSwimmer was developed for the Navy's Silent NEMO project group, which specializes in pirating designs from the natural world and using them in robotics. Nature has had many more generations of beta testing than the US military can afford, after all.

In the case of GhostSwimmer, the swimming motion of the robot isn't actually modeled on a shark's movement, but on that of the more efficient tuna fish. For the outer design, the Navy plumped for a shark-like shape, for reasons known only to itself.

That said, a smaller version of GhostSwimmer – dubbed BIOSwimmer – that mimics a tuna fish in appearance is also under development, although that uses a propeller to get around. Work has only just started on this.

For slower speed reconnaissance, the Navy is also looking at low-powered robot jellyfish that can float around a target, and has also deployed more conventional robot submarines in the Strait of Hormuz on mine-clearing duties. ®

Fittings open on Saturday, to make it easier to take motorized pals with you wherever you go
Bootnotes1 Apr 2022 | 33