Upstart start-up rocketry firm SpaceX is planning to try out its new upgraded rocket landing legs on its next trip to the International Space Station (ISS) tomorrow.

The private space firm has been trying to make the game-changing dream of a precise soft-landing, reusable rocket come true with its Falcon 9 booster.

Two earlier tests have seen the rocket re-enter the atmosphere at hypersonic velocity, restart its main engines and deploy its landing legs to hit the ocean at near zero velocity. But landing in water still compromises the hull integrity.

To really be reusable, the rocket needs to land precisely on a custom-built ocean platform, which SpaceX has dubbed the “autonomous spaceport drone ship”.

“The odds of success are not great – perhaps 50 per cent at best,” the firm said in a statement. “However, this test represents the first in a series of similar tests that will ultimately deliver a fully reusable Falcon 9 first stage.”

To try to stabilise and slow the 14-storey tall rocket, the Falcon 9 has to relight its engines for a series of three burns. The first, known as the boostback burn, adjusts the impact point of the vehicle, then the supersonic retro propulsion burn helps the drag of the atmosphere to slow the vehicle and finally the landing burn, during which the legs deploy, reduces the booster’s speed to around 2m/s.

Of course, slowing down is not enough. The rocket also has to target the floating spaceport, which is 300 by 170 feet - fairly big, but not ginormous to a fast-moving craft that has a legspan of 70 feet. It’s also not anchored in the ocean, so it’s not entirely stationary. The spaceport vessel uses thrusters to help it stay in place instead, which makes the landing even trickier. 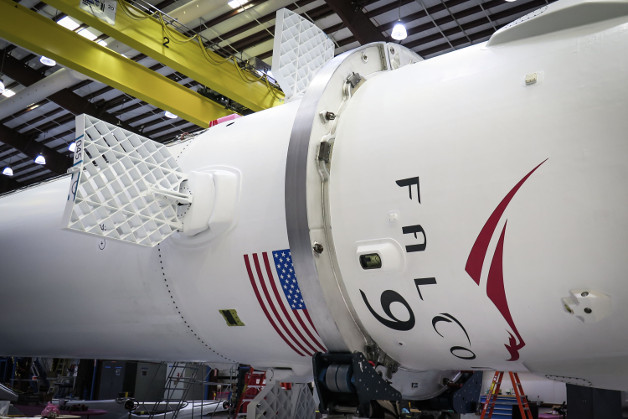 To guide the rocket in, SpaceX has added a brand new component – four grid fins on the booster dubbed “X-wings”. These are stowed while the rocket is blasting off and then deployed on re-entry to move independently for roll, pitch and yaw, which when combined with the engine burns, should help the Falcon 9 find its target.

The attempt to recover the Falcon 9 will only be made after stage separation, when the Dragon cargo craft is safely on its way to the ISS with crew supplies.

“Though the probability of success on this test is low, we expect to gather critical data to support future landing testing,” SpaceX said.

“A fully and rapidly reusable rocket — which has never been done before — is the pivotal breakthrough needed to substantially reduce the cost of space access. While most rockets are designed to burn up on re-entry, SpaceX is building rockets that not only withstand re-entry, but also land safely on Earth to be refuelled and fly again.

"Over the next year, SpaceX has at least a dozen launches planned with a number of additional testing opportunities. Given what we know today, we believe it is quite likely that with one of those flights we will not only be able to land a Falcon 9 first stage, but also re-fly.” ®