Bring back big gov, right? If only the economics, STUPID, could tell us more

Worstall @ the Weekend The economy's not growing as fast as it used to when we had big government and big unions, so we'd better bring them back, right? Or maybe we just don't have enough economic data to tell?

You don't have to go all that far leftward these days to find someone brandishing economic growth statistics at you. Proving that growth was higher in the 1945-1973 period than it has been in our own more neoliberal age. Thus, of course, we should bring back the signal economic and political policies of those days so that we can speed up growth again. Big Unions, government controlling the commanding heights of the economy (this is not just Europe, by the way, the US economy was under a great deal of central control at the time as well), detailed planning. Hell, we should bring back the Old Labour wet dream!

And it's most certainly true that growth was higher in those days and also that there's a correlation between that higher growth and those policies. It's similarly entirely true that our current slightly more free market world doesn't have the same growth rates. That isn't, of course, to say that returning to the old policies would bring back the growth rates, either.

For here we end up with one of the central problems of economics as a field of study (at this point even I'm too embarrassed to try to call it a science). Which is that we've not really got all that information to be working with. We've really only got perhaps a half century of detailed information on perhaps 30 or so economies. What we've got for most places and most times is really pretty ropey stuff. Just a few weeks back Ghana had a look down the back of the sofa and announced that the country's economy was actually 50 per cent larger than we'd all been assuming: and those new numbers were actually better than the old. 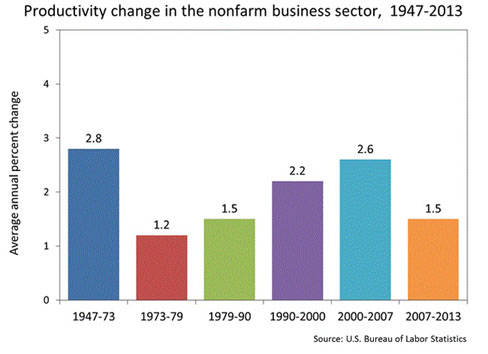 That's really just not enough information for us to be able to answer most questions definitively and accurately. We can make a few categorical statements: rent control is the best way to destroy urban housing short of aerial bombing, soaking the mobile companies in spectrum auctions a great thing to do, that sort of thing. But our paucity of information means that the slightly more complex questions still have the possibility of more than one, and often mutually contradictory, answers.

And, so it is with this discussion of post-World War II growth rates. Other than unions, planning and equaliteee, various thoughts are put forward. For example, that it was really about the rebound from WWII itself, which petered out after a time and we were back to normal.

Ideas and cultureee magazine Aeon offers a range of arguments, from a reduction in our willingness to accept risk (a useful example of which might be the Green Revolution that plant boffin Norman Bourlag achieved with wheat and corn and contrasting that with the way that Golden Rice has been languishing unused for near 20 years now), to the idea that all of the useful things have already been invented (closely allied with Robert Gordon and Tyler Cowen, that one). And all we're doing now is clearing up the details before nodding off to sleep again.

We even get called into noting that the jet planes of today aren't as far ahead, by leaps and bounds, of the aircraft of the '70s as those of the '70s were of those of the '50s. Entirely true of course: but that's pretty common as a technology matures.

There's a breathless rush from experimental to varying levels of usefulness and as something that just simply works is reached then change is incremental. Not a million miles away from the usual modern revision of Darwin in fact, which is lots of very-boring-not-much-happening and then punctuated equilibrium where everything changes in a comparative blink.

Next page: Big Benn and the honey pot men
Page: