Q*bert: The Escher-inspired platform puzzler from 1982

You had to be elegant then, there was no brute force option

Antique Code Show Given the choice, which 80s videogame star would you choose to have a friendly seasonal pint and chin-wag with? Pacman’s obviously got a personality defect, Mario’s breath probably stinks, and that bloke from Jet Set Willy is no doubt a pervert. But Q*bert? Well he’s one interesting individual – full of mumbled swear-word utterances, true, but also brimming with interesting tales born out of the constraints of that era’s technology. Just ignore the fact that he drinks through his nose. 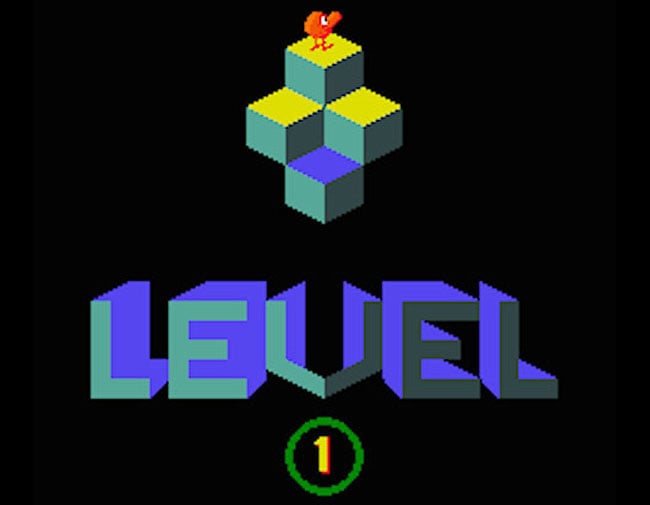 Gottlieb were famous solely for pinball machines until Jeff Lee produced Q*bert in conjunction with sound engineer David Thiel and the multi-talented Warren Davis (programming and acting? – all in a day’s work for this chap).

From concept to classic

It was M.C. Escher’s perspective-bending artwork that gave inspiration for the game’s notorious pyramids of isometric cubes. Lee added distinctive enemy characters such as curly snake-thing Coily – who jumps after our protagonist trying to bump him off – walking flames Slick and Sam, and sideways-moving beasts Wrongway and Ugg. That Lee’s designs have stood the test of time speaks volumes of their quality. 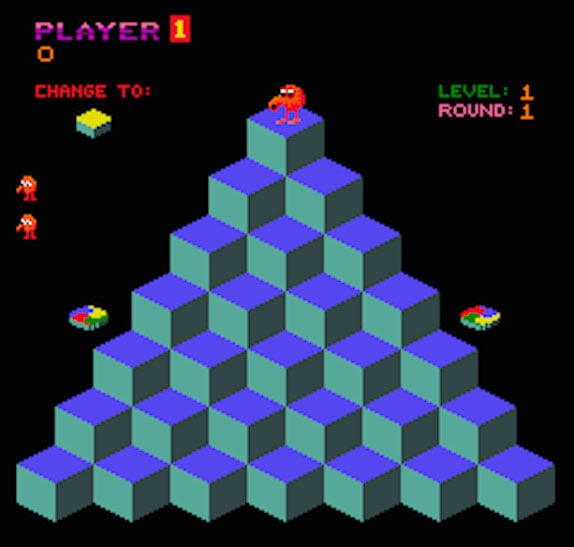 Another day, another isometric headache

As an emerging programmer, Warren Davis used the project to practise code routines like randomness, producing balls that would bounce down from the top of each pyramid unpredictably. He got rid of Q*bert’s proposed shooting ability, and acting on a suggestion from Ron Waxman, Gottlieb’s vice-chairman of engineering, added the important gameplay touch of squares changing colour as our weird hero hops between each one. The aim of the game therefore became very simple: avoid every creature thrown at you while changing each and every square to the desired colour.

Those lovingly designed enemy characters would increase in speed and frequency as levels advanced, and later stages required cubes to be jumped upon a second time so that they change colour once more. Wacky rainbow-coloured swirling discs to the left and right of each stage gave our hero a nifty get-out strategy when swamped by enemies – the discs would deposit Q*bert back at the top of each pyramid. Touches like this lent a rewarding tension to the gameplay as one managed to escape death by the closest of margins. Q*Bert was cat and mouse, tactical yet reaction-based play at its best. 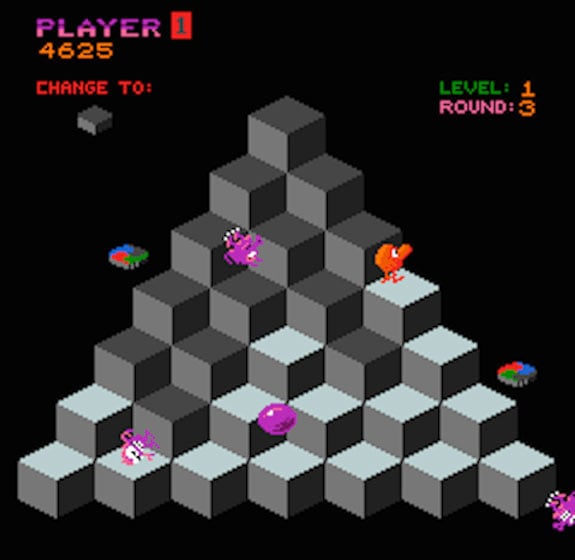 A change of hue in a later stage

Davis felt that arcade games could be marred by overly complex control systems, and ultimately wanted to design a game that could be played while holding a drink! Thus Q*bert’s controls were incredibly minimal: a simple 4-way joystick and nothing else. Yet to suit the isometric playing field, that joystick was rotated by 45 degrees to sit in the arcade cabinet at a slightly jaunty angle – with those directions then lining up perfectly for our hero’s diagonal jumps. And all this innovation in 1982.