Put it on a stick and 'cheesie'

Facebook buying WhatsApp for nearly as much as Hewlett-Packard spent on Compaq in 2001? Well, 2014 was the year of the selfie, after all. Just don't let that snapshot of your bits get hacked.

Leaked naked smartphone pics weren't this year's only embarrassing public spectacles: Microsoft's CEO put his foot in his mouth on women in the workplace, Uber went off a bend, and big-names got scalped by hackers.

Put your Apple Watch on charge, and join The Reg for its look back at everything that was 2014:

Selfies and the art of naked self promotion

Forget the Icebucket challenge, 2014 was the year of the selfie. Celebs, execs and ordinary Joes took 'em, regretted ‘em, ramming selfies right through the barrier of acceptable but annoying into crippling over-hypedness.

By Christmas the selfie stick has become a stocking-filler essential, a definite sign the wave was over.

Starting it was girl-bait Bradley Cooper who grabbed Ellen DeGeneres’ Samsung to shoot fellow celebs at the 86th Academy Awards in Hollywood and then post the shot in a tweet that broke the record for most retweets - one million in the 45 minutes following, and more than 3.2m by the evening of the Monday the next day. Among those framed were Oscar winner and Hunger Games star Jennifer Lawrence - I’ll come back to her.

But re-tweets told just part of the story: 8.1m people saw the tweet, which also garnered 26m impressions. Twitter couldn’t cope and brought out the fail whale. It made such an impression, that celeb stalkers were left on the verge of tears when a Twitter bug briefly removed Cooper’s Tweet from their accounts. 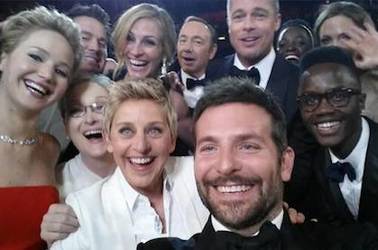 The Oscars put selfies in the spotlight. Soon boring execs at middling tech firm’s events were huddling on stage for their cheesy moment in the sun.

War was no barrier, with native Crimeans shooting Selfskies with the heavily armed invading troops that returned the region to Russia in March.

Neither was decency: one fan watching the Giro d’Italia cycling race in Dublin in May seized the moment to grab an opportunist shot with one racer who’d collapsed, rather than help the fallen competitor to his feet. It was a shot too far for the web, with snapper - David McCarthy, aged 19 - earning Tweetdom’s ire. There was worse seven months later, during the Sydney siege.

Selfies, it seemed, were turning into a double-edged sword.

Train-wreck story of the year was the hacking of Apple’s iCloud and leaking of selfies of famous women including - yes - JLaw and swimwear model Kate Upton among them.

Photos of 17 celebs, self-snapped using Apple’s phone, were posted to grime-‘n-core board 4chan by a hacker who claimed to have 100 on file.

Images were soon circulated widely on the internet, with Reddit doing a take down.

The FBI started investigating but months later the identity of the hacker remains unknown. Apple conducted its own investigation and found no breach but it did acknowledge a “targeted attack” on “user names, passwords and security questions” had taken place prior to the naked splurge. Apple therefore reminded everybody to use “strong password and enabled two-step verification.” Two-factor authentication wouldn’t have protected iCloud users, though, putting the onus back on the celebs to button down their security when they get unbuttoned for their phones.

Facebook spent $2bn - the equivalent of two Instagrams in 2013 - buying virtual-reality headset maker Oculus Rift - and a staggering $19bn for mobile messaging app, WhatsApp. That was 19 Instagrams. WhatsApp wasn’t merely Facebook’s biggest acquisition to date: it was one of the biggest in tech ever. Want a comparison? Hewlett-Packard nabbed Compaq for $25bn in 2001.

The wizards and watchers of Silicon Valley outdid themselves in trying to justify WhatsApp, calling it a smart play for traffic and users. Facebook has looked for growth in new members internationally and in mobile, and WhatsApp - with 450 million users and 70 per cent of these active on any given day - arguably delivers Facebook both.

But the deal was stock and shares - $4bn of the former. Facebook simply called WhatsApp “incredibly valuable.” That was it. That’s all it takes.

In the shadow of WhatsApp, Oculus Rift was an rounding error. According to Facebook’s CEO Mark Zuckerberg, he is focusing on what platforms are next for entertainment and personal use. The boy wonder should take care: Oculus Rift was hitting seriously cool status among geeks and nerds, and the primary concern is that Zuckerberg’s Big Co kills what they saw as a promising technology and company.

In so doing, Facebook loses the very users that have been giving it underground cool status and helping drive the excitement around it.

Microsoft paid a relatively meager $2.5bn on Mojang, maker of pre-teen hit Minecraft - the most popular game in history with 100m downloads. But like Facebook, Microsoft was decidedly terse on the whys of the deal. 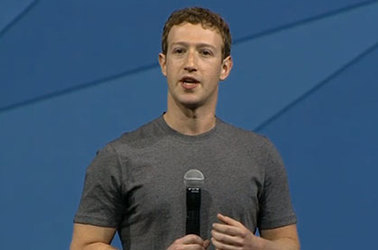 What does Microsoft get? The game itself and the development studios and people in Stockholm, Sweden, who built it but not the company's founder who's cashing out. What else? Microsoft wasn’t saying at the time and hasn’t said since, preferring like Facebook on Oculus Rift to avoid talking about it like it never happened or we dreamed the whole event.

Microsoft chief Satya Nadella was reading from the Zuckerberg M&A script when he said simply that Minecraft is an “open-world platform driven by a vibrant community” that’s “rich with new opportunities.” The PR-friendly answer: “opportunity". The business answer: “wait and see". “Opportunity” is the buzz-phrase Nadella’s predecessor employed to justify Skype and Aquantive, neither of which worked out.