For the love of Bong! He's Chief Contract Killer Evangelist... for WHAT NOW?

Comment We're in one of those phases of the tech biz where imitation equals innovation, if you add excremental incremental changes and a personable plonker to spokesperson The Coming Revolution.

Having lived through this once before, this scribe can't work up a good hype-cycle over boilerplate “innovation”. It's colour-by-numbers stuff, as was the late 1990s tech boom in which anybody with a template business need only stand still to be buried under an avalanche of funny money.

If your sole idea is to imitate someone else's whole operation, except for its customer base, you're not an innovator.

Don't even get me started on the idea that the only thing you can offer a journalist is time with a rootless, clueless Gen Y who exists solely to waste oxygen and rack up frequent flyer points doing the same keynote at twenty-seven conferences a year.

Here's how it always turns out:

“We'd like you to talk to our Chief Contract Killer Evangelist because he's a fascinating guy who's worked in a range of post-Web 2.0 startups.”

The CCKE will be an entitled pain in the neck who hasn't actually ever done anything other than win a college football scholarship once, look good, possess sufficient dexterity to use a microphone clip, and not trip over the furniture.

He travels around on a contract with a rider that would make a Rolling Stone blush (“Damn it, I said, activated water at 35 degrees, why is this nearly boiling? Whaddaya mean Celsius, what is that even? Shelly? Where the hell is Shelly?”).

He hates nothing as much as he hates a comedian being hired as the MC for an event.

Your Chief Contract Killer Evangelist is preening and coiffed. He has watched 30,000 hours of TED videos which means he's learned all Twenty-Seven TED Speaker Mannerisms Guaranteed to Engage Your AudienceTM, meaning in conversation he's a self-important, hyperactive crashing bore, whose chief skill is not answering questions.

Q: “Aren't you concerned that facilitating the hire of contract killers online is illegal?”

A: “Well, Peter - can I call you Pete? - what our visionary leader's big takeaway from the case of Dread Pirate Roberts was, is, that we needed to go back to first principles and build a platform which, from the ground up, made introducing contract killers to their victims a cloud-based, API-enabled hyper-connected IPv6-compliant, encrypted and anonymised experience.” 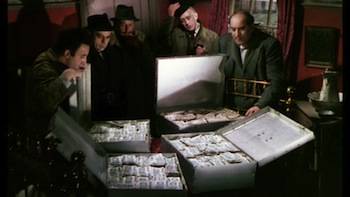 Go back to first principles and build a platform which, from the ground up, made introducing contract killers to their victims a cloud-based, API-enabled, hyper-connected, IPv6-compliant, encrypted and anonymised experience...Or something like that

A: “I'll get to that in a minute. Now, with the platform in place, our next job was to try and ensure a maximally-enhanced seamless transition from desktop to laptop to tablet to smartphone, so that the quality of experience of the stalkee and ultimate victim is consistent in all environments with ...”

Q: “The victim? Why is the victim in the platform?”

A: “Well, Peter - can I call you Pete? - the principle of the connected society is that all parties to the transaction have a clear understanding of their role in it and its progress towards an ultimately successful completion at which point a committed transaction can trigger an API-driven response resulting in a zero-touch high-efficiency payment execution in the cloud ...”

Q: “You can't call me Pete, because I'm David. We still haven't settled the question of legality, though.”

A: “Oh, look, I'm sorry Pete, I have to be on stage in three minutes, but I'll be happy to field your question offline. I'll get my girl to reach out to our lawyers and get you in touch.”

The lawyers' letter that followed would have put this article on the spike if any of this were real ... ®