El Reg tests portable breathalyzers: Getting drunk so you don't have to

Putting booze probes through their paces (all for science, of course)

Method to the madness

Lest you think we'd be so unscientific as to just start throwing alcohol down our necks, a strict methodology was devised for the test.

Testing and interviews were carried out by an abstaining third party to ensure scientific accuracy (and talk to the police if it came to that). It's worth noting that here in California a blood alcohol of 0.08 is grounds for a drunk-driving charge.

Our participants were each asked to take a base reading, consume measured units of alcohol, and then abstain for 20 minutes. This allows the body to absorb the booze and the fumes to dissipate from the mouth. 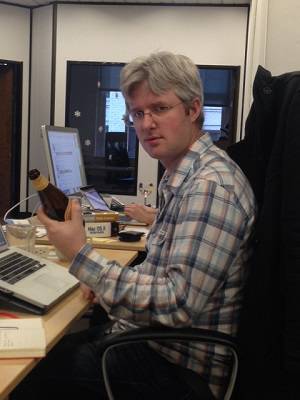 The face of a man who will have to go nine more minutes
without a cold one.

Both manufacturers insist on this 20-minute break period between bottle and breathalyzer to get the most accurate reading. As we found out later, trying a breath test immediately after drinking got some startling results.

First, we tested all four of our hacks prior to drinking. Each was able to record a .000 reading on both devices (to our slight surprise). Next, we gave each of our subjects their first drink.

For testing purposes, the agreed unit per person was either a 12oz bottle of beer from local California brewery Anchor Steam, or a measured glass of a rather cheeky little Chardonnay, which was 12 per cent by volume. For later parts of testing, measured shots of 80 proof Jameson whiskey were used.

At first, testing went well. There was a certain amount of grumbling at first – having one beer and then waiting 20 minutes for the next one is not normal drinking behavior for the testers – but we held on in the name of science.

After 20 minutes a halt was called, and all test subjects had a mouthful of water before using the devices and the blowing began.

Obviously, this wasn't really doing the trick. We needed to step things up a bit. For our next round, we broke out the whiskey on top of the standard beer/wine intake unit. 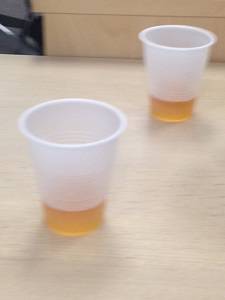 On to the serious testing...

That certainly livened things up! At least one of the subjects advised the test administrator against taking any further quotes for publication. Exact words: "I'm going to edit this, you lunatic." [He didn't in the end, the cheeky bastard. I did. –Ed]

After waiting ten minutes after the second drink, and with 6pm rapidly approaching, it was decided to speed things up a little. An extra beer or wine was issued to each tester, and a second shot.

Things in the office went quiet as our subjects either quietly contemplated the meaning of life or else were enraptured by this photo of dogs painted as panda bears.

Some 20 minutes after the drinking stopped the obligatory mouthful of water was taken and the next round of huffing and puffing began. Unfortunately, however, here was where the testing ran into problems.

Both manufacturers caution against using their gizmos too frequently, since moisture from human lungs will accumulate in the device and block test results. When we tried to get a second round of readings from the Breathometer, the device warned that just such an event had occurred. The software refused to give us any readings, saying there was a problem, and it advised us to contact the company. Within a day we'd got the results back: water damage.

Fortunately, we were able to press ahead with the BACtrack.

By this point each participant had consumed either three beers or wines and two shots of whiskey. The result was that two of us were unsafe to drive – not that the devices are intended for determining that, mind you – and we'd broken one of the breathalyzers.

Required customers to pay for software they did not receive, among other sins
Legal12 Aug 2022 | 3

It can move without anything to push off from, but only via curved spacetime
Science11 Aug 2022 | 18

Black Hat The inside scoop on the Ukrainian IT army, and what could happen next
Security11 Aug 2022 | 4