Bloodhound put back on trail by motherly Jaguar 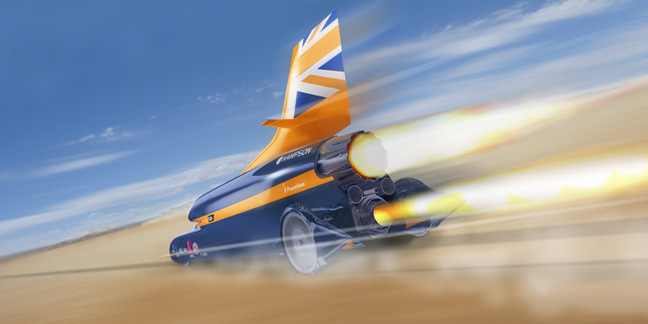 The hand-to-mouth existence of the incredible Bloodhound Supersonic car has been revealed in a blog post by project director Richard Noble.

Noble slams the UK as a nation of bean counters for the difficulty he’s having in raising finance, stating that we have six times as many accountants as doctors and more than the rest of the EU put together. He also says that accountants only look at the downsides. Problems with fundraising made 2014 exceptionally challenging for the Bloodhound project until Jaguar and Rolex rescued the bid to build the first car to do 1000mph.

Noble and driver Andy Green have both written about the Nammo hybrid rocket motor which they will be using in Bloodhound.

One of the challenges for the record attempt is the need to do two runs in opposite directions within an hour; traditional rockets are not designed for such rapid turnaround. The hybrid rocket uses a mix of a solid fuel and liquid oxidiser, meaning it can be shut down and restarted. Given that Green is going to be at the sharp end of three of the things, it’s perhaps no surprise that he appreciates the extra safety the hybrid offers. Rocket propellants are dangerous.

The next step is to test the rocket with the new Jaguar engine which will serve as a fuel pump. Bloodhound originally used a Cosworth Formula 1 engine as a fuel pump but with the new sponsorship from Jaguar Land Rover, a 550hp Jaguar V8 engine has been pressed into service. Green explains that despite the Jaguar engine being less powerful, it offers improved reliability and a clever impeller design means they have the most efficient rocket pump ever built.

In his blog post Green also explains the issues of curing the chassis to 175 degrees Celsius when it’s made of two different metals, and the plans for 2015 which include an 800mph “test”. The 1,000mph record attempt is scheduled for 2016. You can see all the parts of the car laid out here. ®

Vivaldi browser to perform a symphony of ad and tracker blocking with version 3.0

Well I'm looking to AI to save me, looking 'cos it's my design: Could you make my drone learn to fly hybrid?

Pssst. You don't need to manually code it, neural networks will do it for you