'We’re not musicians, we are universal dilettantes'

Feature At this time of year, most of us will have heard more than a few bars of Stille Nacht (aka Silent Night), perhaps sipped some glühwein (mulled wine) and chomped on some stollen. So how about a Teutonic taster of a different sort to last the whole year round? Focusing on the the pioneering electronic musicians of the late 20th Century, Mark Diston looks at what’s new, cool and collectible for the Krautrock-curious and the connoisseur.

The West German Kosmische and electronic music scene which emerged in the late 1960s has always been very influential. The term Krautrock is a catch-all grouping of a disparate group of West German musicians who resolutely followed their own noises and broke with the Anglo-American rock tradition.

Think Bowie and Eno, who copped whole chunks for Heroes, Low and Before And After Science in 1977, through to US dance acts who sampled the likes of Kraftwerk’s Trans-Europe Express and Manuel Göttsching’s E2-E4 in the 1980s. Then think onwards ... to just about every post-rock and electronica act. It seems they all owe a debt to the pioneering work of artists such as Kraftwerk, Can, Neu!, Cluster and Conrad Schnitzler.

Most of the artists involved in the scene stress the reason for their creative explosion was the lack of a restraining commercial music business like that of the UK and US, so the German scene was able to develop a more radical and experimental output motivated by a need to create a whole new cultural scene over the wreckage of a past corrupted by the Nazi era. 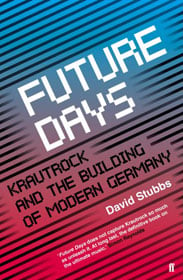 The recent publication of David Stubbs’ Future Days perfectly outlines the cultural backgound of West Germany in the late 1960s. Stubbs is treading in the footsteps of giants. Julian Cope’s Krautrocksampler, although a slim introduction to the subject, is one of the greatest works of music literature and was responsible for a renewed interest in the Krautrock phenomenon in the 1990s. It is also, incredibly, out of print, although for a time it was feeding the Krautrock krazed while circulating dusty corners of the web as a PDF.

Around the same time, the Freeman brothers, from the legendary Ultima Thule record shop, also compiled The Crack in the Cosmic Egg which went a little deeper into the subject, but also went a little off piste by including more mainstream rock acts.

David Stubbs does not have the delirious turn of phrase of Julian Cope, but being less garrulous, he is also free of Cope’s occasional over enthusiasm. Stubbs correctly calls the Ash Ra Tempel meets Timothy Leary story a classic, but the ensuing album a dud, whereas Cope included it in his Top 50. Future Days is well written, well researched and includes interviews with many of the remaining movers and shakers of the Krautrock scene.

Stubbs describes how the music arose in the political and cultural mêlée of 1968 and sagely compares the Zodiak club in Berlin in 1968 to the Cabaret Voltaire in Zurich in 1916. Stubbs claims that: “Growing sections of the country’s youth were perfumed with the heavy toxicity of the counterculture.”

In format, Future Days is more like Cope’s Japrocksampler, which is a longer work than Krautrocksampler and goes into the cultural and historical background in greater detail.

It's great to see Conrad Schnitzler take his part in the story after his glaring omission from the otherwise worthy BBC documentary Krautrock: The Rebirth of Germany. The interviews in the book are enlightening, if not earth shattering, and there are a few beautiful quotes, like this one from Holger Czukay of Can: “We’re not musicians, we are universal dilettantes.” 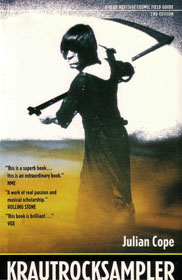 Future Days is the more in-depth book you should read after Krautrocksampler gets you hooked, if you can find the latter. David Stubbs is no archdrood archetype, though he is definitely a fan and has his own style and a few nice catchphrases of his own, such as: “Before our present age of sophisticated fatalism ...” which you have to admire, he is also very knowledgeable and loves the music.

He defines the “Limbus” test, an obscure Krautrock benchmark. I have albums by both Limbus 3 and Limbus 4 – though I can’t claim to listen to them often – and pass the test with flying colours. David Stubbs is preaching to the converted, I confess, I’m a terminal Krautrocker!

Future Days is a great addition to the literature of a music that continues to influence musicians to this day, however David Stubbs charts the decline and death of the music between 1977 and 1982, shortly after the recording of Manuel Göttsching’s E2-E4, so beloved of the US house and techno crew.