The Just City: A brilliant, if puzzling, philosophical dialogue

AI as debated by Socrates 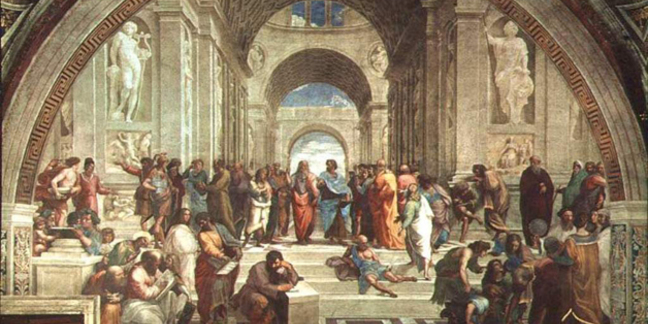 Page File At first glance, Jo Walton’s novel The Just City doesn’t seem to fit into the category of science fiction at all.

We open with the god Apollo, who is confused about why Daphne the nymph chose to pray to the gods to be turned into a tree rather than sleep with him. Pleading with the goddess Athene for understanding, she recommends Apollo get in on an experiment of hers.

At various moments in time, people have prayed to be in the Just City described in Plato’s most famous dialogue, The Republic, and she plans to make it happen.

The Republic is a dialogue between Socrates and other Athenian philosophers about the happiness of the just versus the unjust man, which ends with them describing a city of philosopher-kings, and how that city could be achieved.

Athene’s idea is to take all these people who want to be in the Just City - academics, philosophers, dreamers and teachers - and get them to set it up in Atlantis, a handy site historically, since it will eventually be destroyed.

Unfortunately for the new “masters”, what they need to create the next generation of philosopher-kings is a load of children, who are most unlikely to have read Plato, much less prayed to the gods to be transported to his Just City. To get around this, they decide to buy slaves from ancient times.

But by wanting to buy slaves who are ten years old and needing quite a lot of them, they inadvertently create a demand when returning to the same market, apparently year after year, with Athene’s time-twisting help.

Two such slaves, whose families were murdered so that they could fill the quota, are Lucia and Matthias, renamed Simmeas and Kebes in the Just City. Simmeas embraces her new existence whole-heartedly, particularly since Plato decrees that there should be no discrimination between men and women in the Just City.

The children are instead told to pursue their “best selves”, participating in a universal education system that includes academia, arts and sports for both sexes. But Kebes finds it impossible to forgive his slavery, despite Just City rule that citizens should forget their pasts.

Meanwhile, Apollo decides to be incarnated as mortal Pytheas so that he can come to the city as a ten-year-old and truly understand what equal significance and volition might mean. The story is told from chapter to chapter by Apollo, the two children and Maia, a master who was originally a 17th Century woman, educated by her father and then condemned to abandon her studies after his death.

Aside from the time travel, you’d be forgiven for thinking this wasn’t really sci-fi at all, until Socrates himself shows up in the city five years into its founding and starts asking questions about the “workers” that everyone has been relying on to do all the mundane chores. It’s not enough to be told that these robots, brought to the city as gifts from Athene, have no mind and no intellect, he wants to discover it for himself - so he starts asking them questions.

In many ways, The Just City is like a philosophical dialogue itself, as each character argues for their own vision of the society and tries to come to terms with the consequences they weren’t prepared for.

Most importantly, and from every angle, the citizens ponder personal choice and respect for each other’s opinions, in terms of gender, sex, class, education and eventually, artificial life.

It’s probably not for everyone, but The Just City is a gripping bit of philosophical investigation culminating in a right turn into the meaning of artificially intelligent life as debated by an ancient philosopher, which is not something you come across every day. ®