"With the 5th Generation Intel Core processor availability, the 'Broadwell' microarchitecture is expected to be the fastest mobile transition in company history to offer consumers a broad selection and availability of devices," Chipzilla said in its fact sheet [PDF] announcing the new chips – but some industry-watchers aren't so sure.

The Broadwell microarchitecture was first announced in the summer of 2013 and the first chips were expected to ship by the end of 2014, but manufacturing problems and other glitches forced Intel to push its ship dates into this year. 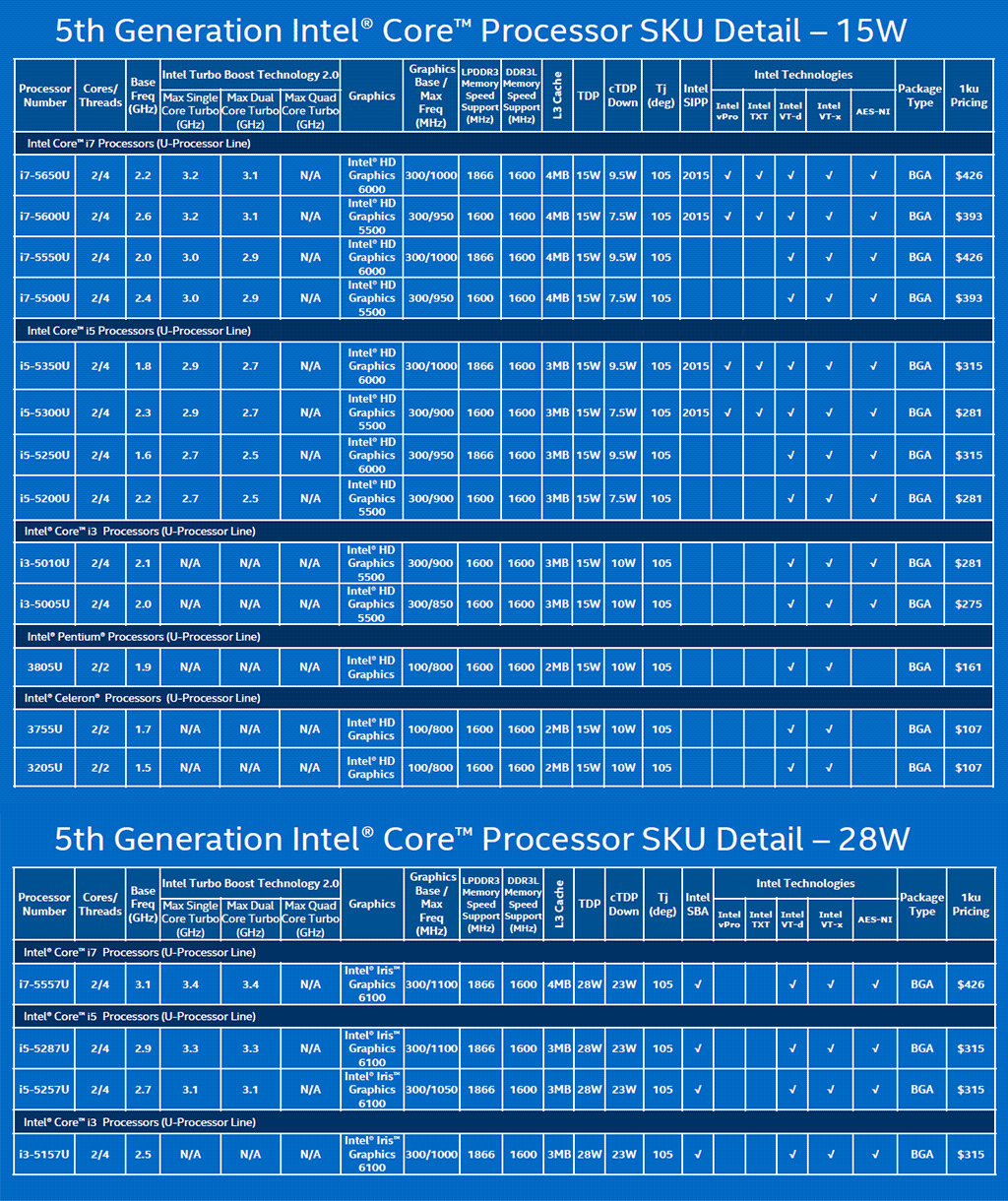 Intel is giving OEMs a lot of options with Broadwell, at a lot of price points (click to enlarge)

As a result, manufacturers weren't able to ship Broadwell-based devices in time for the holiday shopping season, although they're now expected to start hitting retailers' shelves in January. Consumer-class machines will arrive first, while those with Intel's business-oriented vPro feature package will ship by the end of the month. Further down the road, quad-core chips codenamed "Broadwell-H" are expected to ship later this year.

But there's also the matter of "Skylake," Broadwell's successor, which will bring even further improvements over the current-generation 14nm chips. At the 2014 Intel Developer Forum, Intel CEO Brian Krzanich said the first Skylake parts were on track to ship in the first quarter of 2015.

That should be enough to give many OEMs pause, because while Broadwell is a pin-compatible replacement for Haswell, Skylake will come in a new package that will require additional engineering from device makers.  Some analysts believe many manufacturers, particularly makers of desktop PCs, may choose to skip Broadwell-U and hold out for Skylake.

But with rumors surfacing that Intel may be slowing down its Skylake release schedule to give Broadwell a bit of breathing room, it's hard to say just how big of a splash Intel's latest processor tech will make.

...and a Cherry Lake on top

Meanwhile, Intel on Monday also announced that it has begun shipping the first chips from its new "Cherry Trail" line of Atom processors. Cherry Trail is a beefed-up version of the Braswell Atom designs that were announced at the Intel Developer Forum in China last year. While Intel is hoping Braswell will make it into smartphones, Cherry Trail is aimed squarely at tablets.

Intel did not provide details of the first Cherry Trail chips' feeds and speeds at CES, although the initial batch are thought to be clocked at around 2.7GHz and they should provide a significant improvement in graphics performance over the earlier-generation "Bay Trail" chips.

Intel says the first devices featuring Cherry Trail chips should start appearing in the first half of 2015. ®