Kaz and Co. crack the $1K barrier for 4K Handycams 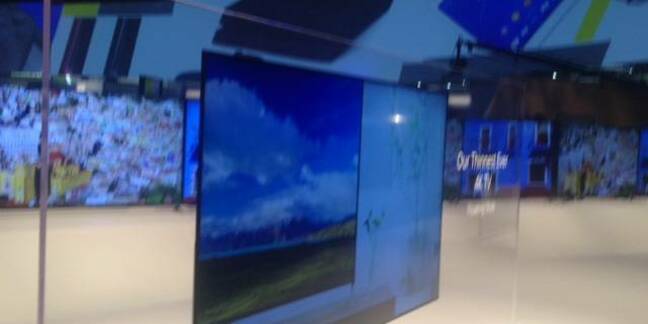 CES 2015 Sony Pictures' epic hack means that part of the Sony empire is well and truly cooked, now the electronics side of the biz is aiming to get you thoroughly 4ked.

The company used its press conference at this year's CES conference in Las Vegas to introduce a super-thin TV and a pair of new video cameras capable of shooting 4K video.

The company said that the 4K Handycam and Actioncam models would both sport the ability to capture 20.6 megapixel, 4K footage, with additional features such as image stabilization.

Perhaps the most appealing feature of the cameras will be the lower price. Sony said that the 4K Handycam will be offered to customers for US$1000. Price for the Action Cam was not given.

Additionally, the company unveiled the slimmed-down 4.9mm Xperia set. The thin TV was showcased to demo a number of new Sony technologies, including a new X1 processor.

The 900C series, like all new Sony TVs set to debut this year, will be based on the Android TV platform, a move which will also bring integration with Android smartphones to control and share video between the mobile device and the TV set.

Rival Samsung made a similar announcement this morning when it declared that all of its smart TVs would be using the Tizen mobile platform.

Other Sony showpieces included the showcasing of the Hi-Res Audio platform- a branding that the company will be sporting for its upcoming Walkman music player as well as its home theater equipment and speakers.

Also on the audio front, CEO Kaz Hirai unveiled a neat piece of kit in the Symphonic Light Speaker, a combination light and speaker system that used a clear glass enclosure to project sound in place of exposed speaker units.

Hirai, praising the device, said that it "demonstrates countless opportunities for design and sound to come together. ®