Cheap Android phones? Bah! How about a $29 mobe from Microsoft? 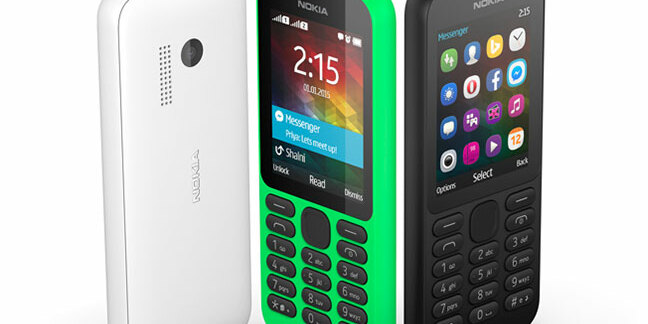 Microsoft has reaffirmed its commitment to the absolute bottom of the mobile market with a new, web-capable phone that will retail for just $29.

In a blog post announcing the device on Monday, Microsoft described the Nokia 215 as its "most affordable internet-ready phone" – but that doesn't make it a smartphone.

If you recall, Microsoft isn't allowed to use the Nokia brand for its Lumia line of Windows Phone smartphones past the end of this year, and it formally retired it in favor of "Microsoft Lumia" in late 2014.

Under the terms of the software giant's gobble of Nokia's handset-making division, however, Microsoft can keep marketing dumbphones as Nokia devices all the way through 2024, if it wants – and that's exactly what the Nokia 215 is.

"The Nokia 215 is perfect for people looking for their first mobile device, or those wanting to upgrade to enjoy affordable digital and social media services, like Facebook and Messenger," Microsoft Devices Group corporate veep Jo Harlow said in a canned statement.

As for its internet readiness, the Nokia 215 comes equipped with Opera Mini, Redmond's go-to browser for Nokia feature phones. Why not Internet Explorer Mobile? Because IE Mobile runs on Windows Phone, and these handsets are running Nokia's venerable Series 30+ platform.

The surprise there is that Microsoft earlier said it planned to ditch Nokia's Series 30, Series 40, Asha, and X lines in favor of flogging Windows Phone. Redmond is now licensing its mobile OS to low-end handset makers at no cost, which should help cheap Windows Phone devices displace Nokia's feature phones of yesteryear – in theory, at least.

But with Chinese mobe-makers driving prices ever lower and name-brand vendors unimpressed by the sales of Windows Phone devices, it looks like Microsoft has had a change of heart about retiring its legacy platforms, if only temporarily.

You don't get much for your $29. Indeed, Microsoft's last entry in the ultra-cheap category – the $25 Nokia 130 – was billed as more of an MP3 player than a phone, and it didn't come with a web browser.

The Nokia 215, by comparison, has a 2.5-inch QVGA screen (that's 240-by-320 pixel resolution to you), a VGA camera, and for storage it supports microSD cards up to 32GB. It also offers Nokia's Bluetooth-based Slam file-sharing tech, but its main selling point will probably be its 20-hour talk time and 29-day standby time.

The device comes in single-SIM and dual-SIM models, which makes sense, since Microsoft plans to launch it in the first quarter of 2015 in Africa, Asia, parts of Europe, and the Middle East – all markets where dual-SIM phones are popular. ®