Pics Photographs of rocks taken by NASA's Curiosity rover may confirm that life as we know it once existed on Mars.

The pictures were shot at the Gillespie Lake outcrop in Yellowknife Bay, which used to be a huge lake back when Mars had surface water. Dr Nora Noffke, who has spent 20 years studying fossils of early microbes, said formations in the Martian rocks looked very similar to those found on Earth – formations created by microorganisms.

“In one image, I saw something that looked very familiar,” Noffke told Astrobiology Magazine. “So I took a closer look, meaning I spent several weeks investigating certain images centimetre by centimetre, drawing sketches, and comparing them to data from terrestrial structures." 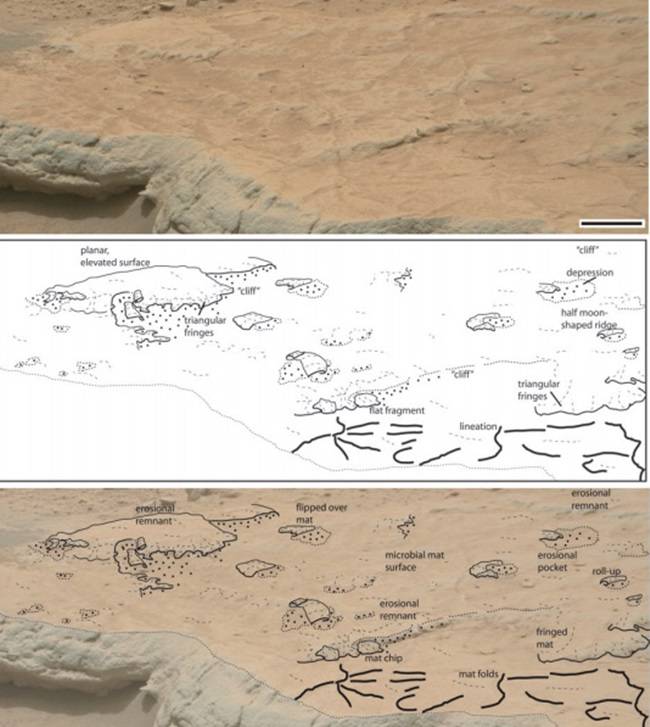 Her research, published [PDF] in the journal Astrobiology, examined structures in the Martian rocks, and compared them to the remains of microbial organisms that were once the most advanced form of life on our planet. Interestingly enough, they match up.

As life evolved on Earth, layers of organic matter spread out wherever moisture could be found, leaving behind microbial-induced patterns in rocks. She acknowledges it’s possible that the structures on Mars could have formed through natural erosion.

“But if the Martian structures aren’t of biological origin,” Noffke says, “then the similarities in morphology, but also in distribution patterns with regards to [microbially induced sedimentary structures] on Earth would be an extraordinary coincidence.”

The vast repository of images NASA has put online has sparked some remarkable claims about what the rover has found while on the Red Planet. We’ve had reports of a fast-growing fungus, and claims of mysterious leg bones embedded in the Martian surface, but Dr Noffke’s paper is careful not to claim to have found the answer to David Bowie’s question.

"And because they look the same, the same mechanism must have made each pile on the two planets. That’s an easy argument to make, and it’s typically not very convincing. However, Noffke’s paper is the most carefully done analysis of the sort that I've seen."

Noffke – who works at the Department of Ocean, Earth and Atmospheric Sciences at the Old Dominion University in Virginia, US – hopes others will test her hypothesis. The next time Curiosity comes across features like this, they would be a good candidate for drilling and analysis by the nuclear-powered rover’s on-board laboratory.

The ideal solution would be to get samples of the rock back to Earth for study, she notes, but that’s well in the future. While NASA has plans for a sample return mission they are at least a decade away and may not even take place, particularly if Elon Musk is already on the surface. ®